by Ben Devlin
published: 5 May 2018 in Album Reviews
Tweet 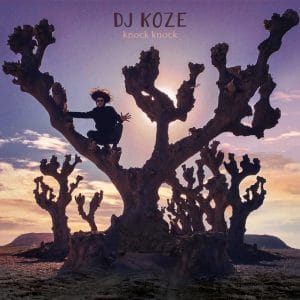 DJ Koze is a man of many talents. He’s following up 2013’s Amygdala with a new album that seems to pride itself on showing off as many angles as possible, whether it be the infectious filter-house of Pick Up, the hazy psychedelia of Music On My Teeth, featuring Jose Gonzalez, or the boom-bap samples of Lord Knows. A stylistic chameleon, he flits from style to style in such a way that Knock Knock becomes quite an ambitious body of work, more than the sum of its parts.

One common thread is Koze’s love of glitchy samples, as well as processed vocals from one of his impressive array of guests. These guests are often used well, such as Speech from Arrested Development on the groovy Colors Of Autumn and Róisín Murphy on Illumination. However, her second appearance on Scratch That feels unnecessary, with gimmicky production that overstays its welcome.

Another bump in the road comes with Jesus, which doesn’t go anywhere worthwhile with its awkward groove, but occasional filler tracks like this are almost inevitable with the album’s runtime reaching 78 minutes, and luckily there is never any serious lull.

The highlights are the housy numbers: Bonfire’s growling bass offset by its jittering chords as well as Pick Up’s hypnotic, euphoric but melancholy sample, and when the album comes to a close – with pulsing bass and swirling vocal layers slowly fading out – it feels like the end of some strange Odyssean journey, one that you may want to embark on again before long.