DJ Tiesto – In My Memory 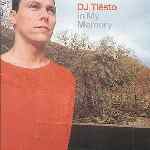 Widely tipped as the next “superstar DJ” to make that leap from the clubs to the charts, DJ Tiesto, aka Tijs Verwest, has been making a well respected name for himself with remixes for the likes of Moby, Delirium and bizarrely, the Dave Matthews Band. In My Memory is his first collection of original material, and should go someway to deciding whether Netherlands-based Tiesto will be following in the footsteps of the Chemical Brothers and Fatboy Slim .

In My Memory is an ambitious debut album, consisting as it does of one disc of new material, and an additional disc of remixes. The uninitiated are best trying the first disc initially, as the constant trancey throb of the remixes could wear down anyone who isn’t a hardcore dance fan.

Magik Journey is a suitably epic introduction to the album. Two minutes of stately synths and orchestral strings bring to mind William Orbit‘s recent dalliances in classical music, before the drumbeat crashes in and the track is transformed into a relentless beat-driven masterpiece. Tiesto skillfully brings down the tempo towards the end, before mixing into Battleship Grey, one of the more atypical tracks on the album.

Battleship Grey succeeds purely because it is so different to the rest of In My Memory. Featuring the vocals of Kirsty Hawkshaw, this probably once would have been called ‘trip-hop’ if that phrase hadn’t been so overused in recent years. Hawkshaw’s vocals are luminous, and her only fear must be being christened “The New Dido” if this is a success.

The rest of the album reverts pretty much to type, with the blistering Surburban Train and exhilarating Flight 643 being pretty intense highlights. The exception to the rule of blistering backbeats is the reflective Closer To You, reminiscent of the chilled out moods of recent Zero 7 material. Magik Journey makes a welcome reappearance at the end of the record, in the guise of a ten minute extended version.

In My Memory is a fine debut album by a man who looks set to follow his friend and contemporary Paul Oakenfold to massive success. Anybody who’s not a fan of trance and dance music in general will be left cold, especially by the more specialised remix disc. As with most dance albums, it’s best listened to in a club or a field at full volume rather than In a bedroom. With the festival season just around the corner however, this is a prime contender for the soundtrack of the summer.

More on DJ Tiesto
DJ Tiesto – In My Memory