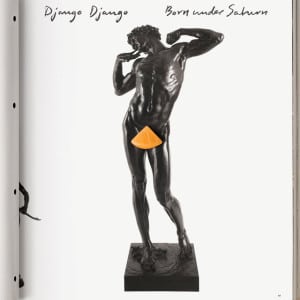 The remarkable upward trajectory of Django Django following the release of the quartet’s self-titled debut album took many by surprise – even the band themselves. After meeting at Edinburgh College of Art in 2009, David Maclean (drummer and producer), Vincent Neff (singer and guitarist), Jimmy Dixon (bassist), and Tommy Grace (synths) spent three years creating the record largely in Maclean’s bedroom/studio.

It was a process that clearly worked wonders, as when the album was released at the beginning of 2012 it was met with widespread critical acclaim.The experimental concoction of psychedelic rock and electronica propelled them to recognition beyond their wildest dreams, with the LP earning Django Django a Mercury Prize nomination and a place on countless album-of-the-year polls.

This success ultimately resulted in the album going platinum in the UK and before they knew it, the four-piece were playing in front of thousands of fans all over the world during an extensive tour. Understandably, Django Django’s busy tour schedule had a knock on effect on their attempt to deliver a follow-up, but after two years on the road they finally managed to get back in the studio and produce their much anticipated second album, Born Under Saturn.

With the pressure to emulate the success of their debut, it would have been natural for the band to look to push their sound in new directions and try something completely different. Instead, Born Under Saturn is very clearly a Django Django record, one that very subtly updates on what its predecessor achieved so effortlessly – as demonstrated by the stuttering synths and glossy finish of its captivating, Beach Boys-esque first single, First Light.

From start to finish, it is an album that is noticeably more confident in its execution, while also retaining all the familiar qualities that made their debut so infectious. Opener Giant quickly establishes what it was about Django Django that sucked so many listeners in the first time around, with its straightforward melody and shuffling beat providing the perfect backing for Neff’s soothing vocals.

The ease at which they weave these different elements together remains as impressive as ever, with their scattergun approach even more evident on the appropriately titled foot-stomping rocker Shake And Tremble. Yet, Django Django are at their best when they are direct – something highlighted by Default; the standout single from their debut – and that is exactly what makes the middle section of Born Under Saturn so irresistible.

First there’s the positively charming Pause Repeat, which is an early contender for anthem of the summer with its shuffling beat and repetitive piano melody. It is quickly followed by the equally addictive single Reflections, where a thumping synth beat makes way for a grooving hook and arguably the most danceable chorus on the record – complete with a rather unexpected, but very welcome jazz sax solo.

As Born Under Saturn reaches its final third, the level of consistency remains high, with tracks such as the expansive High Moon and the almost nonchalant Beginning To Fade both worth a mention. That said, there is the occasional misstep. Found You has so much going on during its runtime – including a multitude of percussion sounds backing its looping hook – yet it fails to be anything other than deadly dull, while the weird alien squeak that adorns Vibrations is just irritating.

However, these are only minor footnotes in an album that finishes just as strongly as it started. Penultimate track Break The Glass has a guitar riff that will just make you want to head to the nearest dancefloor, before Life We Know brings the LP to a close with a finely honed slice of psychedelic pop. If the Django Django boys did feel any pressure on their return to the studio, it certainly doesn’t show on Born Under Saturn, which will ensure that their growing reputation is further enhanced.