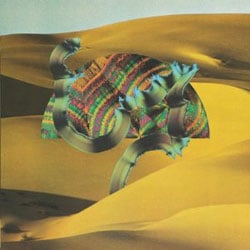 Django Django are not quick to shy away from their influences. Apart from their eponymous debt to jazz virtuoso Django Reinhardt, the band takes its cues from a number of fashionable contemporaries; Hot Chip, Cut Copy and Metronomy to name a couple. What they may lack in originality, however, the group makes up for in style. After four long years in the making, their debut LP is an outstanding first up effort, a striking blend of understated electro groove and top shelf singles.

Part of Django Django’s appeal is their ability to seamlessly blend genres and forms. From surf jam (Life’s A Beach) to folk (Hand Of Man), it provides them with a point of difference within a saturated straight-up electro market. This mish-mash approach also means even their slightly weaker tracks have at least some variety and appeal.

Singles wise the group has a penchant for crafting tracks that have mass commercial appeal. Waveforms – one of the first songs taken from the album – flows with typical electro flourishes and polyrhythmic beats before climaxing with a stunning multi-harmony coda. Wor is another that is quick to grab attention with its extended clap-a-long Wild West intro and surprisingly minimalist verses.

The most viable single, however, is Default. Accessible yet rewarding after multiple spins, its hypnotic voice samples and ‘push pull’ beats make it the ideal choice for dancefloors far and wide. It chops and changes without sacrificing for structure and flow, very much in the same vein as the Klaxons‘ best work.

The gloss of such singles serves to complement Django Django’s more experimental and adventurous tracks. Album opener Hail Bop sees the quartet exploring the types of sonic landscapes journeyed by the likes of the Midnight Juggernauts. Conversely, the band shows adaptability by foraying into softer, folkier textures. Firewater and in particular Hand Of Man are anchored by lovingly constructed steel-string arpeggios. Although slower in pacing, they never compromise the upbeat vibe of the album.

The only time the momentum stalls is at the album’s stretch. Instrumental Skies Over Cairo tends to wane due its over reliance on an Indian-inspired hook while Silver Rays lacks the creativity and experimentation of earlier tracks. That said, despite being weaker songs, it is still the type of material most up-and-coming electro acts would sacrifice their bass player for.

It’s a fine line when a band treads so closely to their influences. Django Django may have sourced inspiration from these influences, but they have far from copied or imitated. Instead the group has created an album that is fresh, inventive and likely to be one of the more promising releases of 2012.