by Bekki Bemrose
published: 17 May 2019 in Album Reviews
Tweet 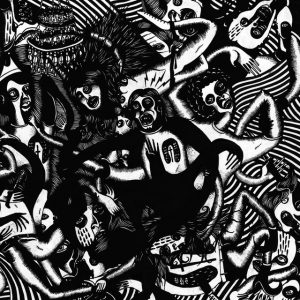 A djinn, more commonly referred to as a genie in the western world, is a supernatural creature. And it feels like a comfortable reference point for DJINN, a group made up of members of psych bands Goat and Hills. Yet where they go with it isn’t entirely expected. Rocket Recordings have long been putting out records at the weirder end of the spectrum, but DJINN has to mark their first jazz release.

Unsurprisingly, it’s not a trad-jazz collection, but one that’s as odd as might be hoped. The record oscillates between spiritual concepts and earthly realities, touring just about everything in between. Interestingly, those that tip their hat to the afterlife tend towards a blissed out and balmy vibe a la Le Jardin De La Morte or the airy, warm hover of Ghostdance. The darker tones are left to the more worldly suggestions of Jazz Financed and My Bank Account, which both slip into madder territory with a more hard-boiled feel.

The quivering breakdown and subsequent bombastic recovery of My Bank Account is a fine example of the record’s slippery motives. And despite the seemingly lofty genre curveball and high concepts Rertland Bussels and Djinn and Djuice more than suggest a the twinkle in the eyes and ears of the album’s creators.

While these psych devotees may have ventured into the realms of jazz it’s of the distinctly trippy kind, as the hypnotic lullaby-like charms of Fiskehamn Blues are testament. And the instrumentation is as fluid as the notions the record explores, making full use of a range of reed and percussive instruments. Nevertheless, even at the album’s most delirious moments, it remains cohesive.

Generally speaking a great deal of the freshest music being made currently operates within the realms of electronica, as music makers continue to explore the possibilities of technology. Then, a record like DJINN comes along to demonstrate that it’s still possible to create a unique experience from well-worn tools.

DJINN is what you get when you put two and two together and get five. Perhaps sometimes it is better to embrace the illogical than be a slave to reality. Not everything has to make sense. Take it for what it is: a jewel in the crown of the underground.