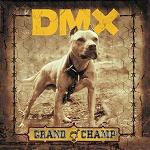 Grand Champ’s intro welcomes you to the world of DMX. The sombre message that dogs are more trustworthy than humans mirrors the African American rhetoric used by Dead Prez on Let’s Get Free while the vocals of Bashir Fadai further enhance this feeling.

Despite the heavy introduction the album is slow to find any rhythm. The first indication that the album is going anywhere comes in Dogs Out. The clever sampling doubled with tight production, shows that, in places, DMX is still ahead of the game.

Come Prepared vindicates the view that gangsta is becoming more mainstream, but the skit is a seamless link into Shot Down featuring 50 Cent. The track is a stark contrast to 50 Cent’s latest single P.I.M.P and more than anything showcases the darker side to the G Unit “soldier”. However the beat could well have been stolen from an early ’90s F1 computer game.

While the album may not quite meet DMX’s previously high standards there’s never a chance of excessive track skipping as no consecutive tracks are average. But by the same token there’s very few consecutive brilliant songs.

Songs like Untouchable and Thank You offer a mellower feel to the album, but crucially DMX avoids the heinous crossover to R & B, a path Ja Rule has taken to the detriment of whatever credibility he had before. DMX even attacks Ja openly on Dogs Out, but the subtle insult probably won’t lead to beef on the scale that Nas and Jay Zreached. In any case, there have been better battle tracks addressing Ja Rule in recent months, crucially from the Shady Records family.

F*** Y’All escalates the aggression inside the “dog”. The content of the song is hardly surprising given it’s title, and is essentially an open criticism of just about everyone.

The album’s stand out track, We Go Hard featuring Cam’Ron, has a Jay Z feeling to it (listen to Takeover and try not to make comparisons). With Cam’Ron being part of the Roc-A-Fella fraternity it’s not all too surprising. Like in Dogs Out, a clever use of samples works to elevate the song into that elusive “other level”. The stop-start vibe on the track encapsulates the nature of Grand Champ – a good thing on one song but not so effective on an entire album.

DMX growls and grunts his way through Grand Champ in his unique style that has seen him as the most successful Ruff Ryder. Even as a fan Grand Champ is not easy to listen to from start to end in one go, but the promise of X Gon’ Give It To Ya at the end is enough to keep you hanging on and the wait is worth it.

Unlike Great Depression many of the tracks on Grand Champ are “growers” and so it won’t be held in as high regard. But, in a period when Eminem’s musing, “Hip Hop is universal now / It’s all commercial now / It’s like a circle full of circus clowns up in the circuit now,” has never held so much value, DMX has managed to keep it grimy and “street”.