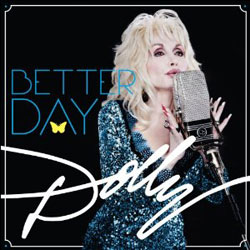 The financial markets have collapsed; the streets are on fire; the Middle East runs red with rivers of blood; and lonely polar bears drift on creaking ice floes over lifeless seas. Is Dolly Parton bothered? Is she heck.

Give it a rest, she tells the doom-mongers, winking and elbowing them playfully in the ribs. Mere seconds into Better Day, we’ve learned that “these are wonderful times we’re livin’ in” and it’s time to just “get on with the show”. The fate of the world is in God’s hands, so we’d better just get on and enjoy ourselves in the meantime. Maybe she has a point: it’s hard to argue with the folksy wisdom of phrases like “people been talkin’ ‘bout the end of the time ever since time began.”

No surprises here, then – as the poster girl for indefatigable perkiness delivers more homespun jollity with another album of thumbs-down-the-front-of-the-Levi’s squaredance singalongs and fiddle-de-dee footstompers. Rolling banjos, slide guitar and saloon bar pianos are all present and correct. The usual subjects are dissected: (a) lookin’ on the bright side, (b) missin’ that man, (c) thinkin ‘bout kissin’ that man, and (d) leavin’ that piece o’ dumb white trash. All is well with the world: even when she’s tret bad, there are always better times to come for Ms Parton.

Any further analysis would be mere petulance. A pedant might highlight the inherent contradictions within phrases like “live the good life, treat this planet right”. A worrisome nit-picker might scratch his head in confusion at the reverse morality tale The Sacrifice, in which Dolly draws parallels between Our Lord’s suffering on the cross in order to wipe clean the sin of Man, and her own neglect of her loved ones in order to get mega-rich. “Grindstones and rhinestones have made up my life,” indeed. A purveyor of cheap gags would observe at this point that her chances of entering the kingdom of heaven would be slim in any case: there’s no way those are fitting through the eye of a needle.

And one of them there clever city-dwelling hair-splitters might get all dizzy and confused at the self-reflexive lunacy of Country Is As Country Does, a Moebius strip of a song whose recursive definition of country (that it is country) appears to challenge Bertrand Russell’s maxim that a set cannot be a member of itself. Who shaves the barber in the town where the barber shaves only those men who do not shave themselves? Why, Dolly does of course, winking at him in the mirror and elbowing him playfully in the ribs as she merrily waggles the cut-throat from side to side. Says Dolly, “I’m quite content with who I am, and if you ain’t – well, kiss my ham.”

No, such party-pooping intellectualisation and wilful obscurantism ain’t welcome here. Dolly has invited you to her hoe-down, and it would be churlish to refuse. Just remember to leave your brain at the barn door.