Various – Domino Records: They’ll Have To Catch Us First 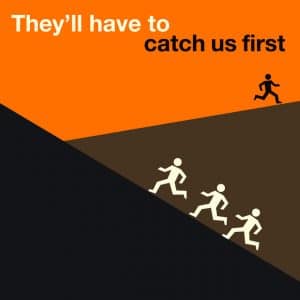 Mr Domino, it would seem, doesn’t just busy himself making pizza, he also has his own record label. Oh, and when things get boring, he has his own game to entertain himself. Busy man. The record label side of things began in 1993, and having recently celebrated their 10 year anniversary, Domino Records have risen from obscurity to their current location nestled snuggly among the leading independent record companies.

The compilation gets started by Psapp, whose blissed out brand of folktronica sounds like Four Tet going on holiday with Zero 7. It’s an instant Domino declaration that this record company is not about following musical stereotypes under the pretense of earning a fast buck and a slap on the back from Mr Bank Manager.

Post Psapp, the folktronic baton is passed to the frightfully underrated Adem, You And Moon culled from his latest album, Love And Other Planets is glistening, shimmering beauty to curl up in.

Those cheeky Glaswegian rockers Franz Ferdinand serve up the rhythmic optimism of L Wells to bridge the gap between folktronica and an impending vicious aural assault of rabid garage rock. Eleven minutes, three songs from the likes of The Kills, and Sons And Daughters, but it is the magnificent Archie Bronson Outfit who steal the show. Said band’s recent single, Dart For My Sweetheart is the best song released so far this year.

Other highlights include Test Icicles‘ anthemic Circle Square Triangle, which sounds like The Go! Team fighting Editors. Tortoise And Bonny Prince Billy‘s Daniel is also outstanding and deserved of mention.

So it’s quite a collection of talent Domino have locked away, and this is just the tip of the iceberg. The realisation that Domino have such quality as Smog, Royal Trux, Elliott Smith, Silver Jews, and Arctic Monkeys to their name leaves you wondering just how many of these compilations they could make, each as impressive as the last.

We’ve all done it, putting a compilation together is fun, and when done properly, that is reflected in the listening experience. They’ll Have To Catch Us First has been done properly, and is fun aplenty, praising artists old and new, famous and not. It cements Domino’s reputation as one of the most innovative and consistent labels going – those six letters are as much a ‘quality assured’ stamp as anything else, and at three quid, it’s hard to resist.

More on Psapp
Psapp – What Makes Us Glow
Psapp – Tiger My Friend
Various – Domino Records: They’ll Have To Catch Us First