by Steven Johnson
published: 11 May 2014 in Album Reviews
Tweet 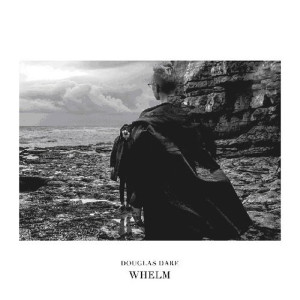 Erased Tapes have built their reputation and identity around an impressive collection of artists creating modern classical music of considerable beauty but latest signing Douglas Dare brings something relatively under-represented on the label to date, namely vocals and songs.

His background may be in instrumental music but on debut release Whelm he has delivered a set of songs full of snowy, svelte elegance and considered clarity. Ahead of the album being released Dare spoke of how it was influenced by the sea (possibly originating back to his upbringing in the coastal town of Bridport) and he manages to incorporate a sense of landscape and geography into his music, not through the exclusively instrumental methods that other artists resort to, but primarily (and unusually) through his distinctive voice. Frailty and tremulousness may be the qualities that initially rise to the surface but there’s an underlying fortitude to it also.

A stained glass poeticism and arched emotional tautness is present from the beginning, Clockwork and Nile introducing the core elements of piano, voice and faintly traced electronic beats which are all held together by a cold spaciousness. Repeat sees him offer serious introspection and self examination while a near unrecoverable melancholy settles over Caroline. Both tracks retain the imperishable beauty and cinematic finish that runs through the album however. Musical comparisons aren’t freely forthcoming yet it’s clear that he fits perfectly with Erased Tapes, sharing common ground with artists like Nils Frahm and Ólafur Arnalds, especially with regard to the purity in how they distill their musical ideas.

The second half of Whelm is where Dare truly gets into his stride. Unrest is one of the album highlights, the lyrics about him feeling “blessed in this unrest” reflecting the sense of solace that beautifully envelops the album. It’s a feeling that is further extended by the quietly pirouetting piano at the end of Lungful and the denser, emotionally strained sounds on Whitewash. It is this trio of tracks that are subtly reminiscent of the stripped down later work of American musician John Vanderslice. The majestic slowness and stillness of Whitewash, meanwhile, also somewhat unexpectedly brings the albums of early Low to mind, suggesting what they would sound like if piano rather than guitars had formed the key element of their sound. The mildly glitchy electronics of Swim add a further atmospheric layer, and he signs off with the isolated peacefulness of London’s Rose.

There’s something sealed off and self contained, yet also very personal and affecting about his music. It may require several listens to fully appreciate the depth of beauty present, but the emotional payback proves it is time well invested. Whelm is a confident and well-defined musical statement that shows Douglas Dare has taken little time to hit the standard we’ve come to expect from Erased Tapes. It’s quite possible that he’ll eventually be viewed as one of the biggest names on the label.