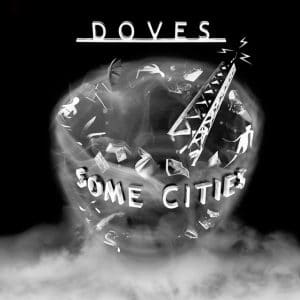 It seems fitting, somehow, that Doves are signed to label Heavenly. For heavenly is what Some Cities, their third album, is: an ethereal outpouring of emotion; melancholic madness meeting soul-soaring serendipity head on.

There’s everything you expect of a Doves release – atmosphere, depth, plenty of spiralling melodies, postulating beats and pounding fragility – yet a subtle change of direction. The Mancunian trio have lost none of their originality.

A relief: the lengthy three years since the release of The Last Broadcast had raised expectations, realised in the eponymous opening track. We hear the beat of a drum, then a skiffle of guitar, the shake of a tambourine before finally vocalist Jimi Goodwin introduces listeners: “I think I might have met you before…”, exploding in to familiar Doves territory, propelled by a rolling momentum that carries in to the Northern Soul-tinged Black And White Town. Welcome back.

Gone is the prog-like polished production of the Last Broadcast, it’s more akin to debut Lost Souls in timbre. Yet while those were records that sounded like they were conceived in wide open countryside or of the rolling sea this is an ode to the industrial heartland of their childhood; at turns crunching and urban, desolate and apocalyptic.

The band’s chief inspiration, it’s claimed, came in returning to Manchester after months of touring to find the city had changed in its absence; old buildings had been ripped down, new developments taking shape in their wake. It’s also more confident and cheerier than previous releases, with Almost Forgot Myself the closest the band gets to out and out jaunty, with searing melodies, soulful bassline and panoramic cityscapes.

The Storm is an eery, echoey ode, at times bitter and discordant as a scuzzy rumbling of percussion builds in the background, a veneer of claustrophobia ever present while One Of These Days explodes in to a soaring chorus. Everywhere there’s a glut of guitar licks, here and there the sound of moody piano and even, in Someday Soon, a touch of a cappella vocal work.

While contemporaries – Keane, Snow Patrol et al – seem content to pedal a paint-by-numbers approach to modern-day isolation, albeit a popular and profitable one, Doves give their heart and soul. Some Cities is no exception and could prove their most successful album yet.