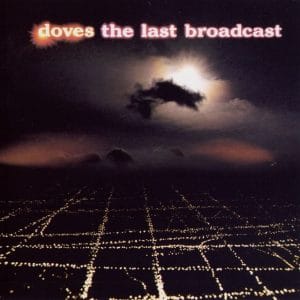 The debut album from Doves, Lost Souls, caused paroxysms of excitement when it was released a couple of years ago. An epic slice of brooding melancholia, many critics named it the best album of the year and compared the band to Radiohead and The Verve. In truth, Lost Souls, while certainly impressive, was a bit morose to stand up to repeated listenings. It had some terrific songs, but was more an album to admire than one to play constantly. The Last Broadcast is a huge leap forward from Lost Souls for one simple reason: Doves have lightened up.

Obviously, the Manchester three-piece haven’t suddenly metamorphised into S Club 7 , but there is an new found optimism and lightness of touch about this record that marks it out as one of the major releases of the year.

Nowhere is this more apparent than on the astonishing single There Goes The Fear. From the chiming guitar of the introduction, through the spine-tingling middle section where singer Jimi Godwin exclaims “close your brown eyes”, right up until the finale of carnival chants and Brazilian drum loops, this is seven minutes of pure magic. It’s the sort of song that The Stone Roses may have produced in their heyday, and is a surefire contender for single of the year.

Other tracks come close to matching the breathtaking high of There Goes The Fear – Words, in particular, has a guitar reminiscent of U2 and an infectious chorus of “words they mean nothing, so you can’t hurt me” that’ll you’ll be singing for weeks. The appropriately titled Pounding has a relentless drumbeat (certainly Andy Williams‘ finest moment here), and a euphoric chorus of “seize the time…it won’t last forever”.

It’s not all uplifting, exhilarating stuff either – Doves are still masters of the melancholy ballad too, although the songs are performed here with even more confidence than on Lost Souls. M62 Song (titled as such because it was apparently recorded underneath a flyover on the M62!), is apparently an adaptation of an old King Crimson song. However, it could almost be a early recording by Badly Drawn Boy, given it’s lo-fi production and general acoustic loveliness. The title track also has a poignant, regretful air (“there comes a point where you feel nothing…this is the last time”), at odds with the positivity of the rest of the album.

There genuinely isn’t a bad track on The Last Broadcast – even some of the less immediate songs such as The Sulpher Man take on a charm of their own after a few listens. This could easily be the album that makes huge stars out of Doves – the talent is there for all to see, but whether the public are ready for them remains to be seen.