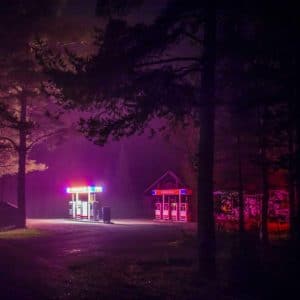 The most immediately striking thing about the first Doves album in 11 years is the way it so effortlessly picks up where the group left off before their hiatus. That’s not to say that it sounds dated or stuck in the past, for on the contrary The Universal Want feels fresh and relevant, but it strikes a fine balance between progress and comforting familiarity, bridging the years since 2009’s Kingdom Of Rust so effectively that you quickly forget just how long it’s been since Doves last released an album.

Carousels is perfectly placed as opening track and lead single. Riding high on a breakbeat that’s built on a Tony Allen drum sample, it’s an immediate statement of triumphant return. “I’m gonna take you down, back to the old fairgrounds,” Jimi Goodwin sings in the chorus, lyrics that represent both hope and nostalgia. It’s a reminder that this is a band that phoenixed from ashes, quite literally: their previous incarnation as dance outfit Sub Sub came to an end when their studio was destroyed in a fire, but Goodwin and twin brothers Jez and Andy Williams regrouped as Doves. Coming back from a decade long break is a cinch after that.

There are moments in The Universal Want that call back to the band’s electronic origins, not least the loop-like opening of For Tomorrow and the interlude in the same song where the bass grinds away over a backing of electro shimmer. Throughout the album guitar parts quite often riff on a single note, more concerned with rhythm than with melody. And the title track builds from a lush piano-led start – Doves have rarely sounded so much like fellow Mancunians and Talk Talk fans Elbow – to a breakdown that’s rather more Haçienda circa 1991. Keyboardist and unofficial fourth member of the band Martin Rebelski is on fine form throughout the album but here he really comes into his own as he shifts from understated chords to house keys.

Mother Silverlake is similarly euphoric but is more understated about it. Early on the track is oddly reminiscent of The Smiths, with something of a Johnny Marr jangle to the guitar and Jez Williams providing a falsetto that reaches for Morrissey-like melodies. But it develops into a glistening piece of electro-funk: perhaps this is what The Smiths would have sounded like if they’d stuck around long enough to undergo a Joy Division into New Order type transition. At the other end of the spectrum, closing track Forest House recalls the late night sensibility of Doves’ first album Lost Souls with its acoustic guitars and gentle heartbeat of a drum part.

However, the dominant mode of The Universal Want is more stadium-sized. At times, this arena-filling sound is a bit too overstated. Previous Doves albums have switched in an almost post-rock way between big anthemic tracks and more intimate ones, but here the emphasis is more on the former. The sheen and crackle that permeates much of the production is thrilling at times but can be unsubtle: you can almost visualise the Adam Curtis style VT flashing on big screens behind the band.

But for the most part The Universal Want lives up to that triumphant return presaged in Carousels. Calling back to various touch points from Doves’ career to date, it’s a fitting summation even if not a culmination or a career peak. If this is what they can pull out of the bag after a lengthy hiatus then one has to hope that Doves will build on this album’s momentum and continue to make new music.