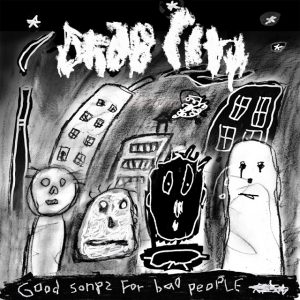 Despite a lively social media presence, the duo say precious little about themselves, but on their debut album Good Songs For Bad People, their off kilter yet peculiarly accessible music speaks very eloquently for itself. Pitched someway between the moody, crepuscular trip hop of Portishead and the quintessentially Californian folk rock of classic West Coast bands like Jefferson Airplane, this is a distinctive, confidently crafted record that manages to sound simultaneously both woozily freeform and tightly honed.

Take for example the third track, Hand In My Pocket, the tale of a homeless, wandering youth. It’s an enticing cocktail of shifting, shuffling rhythms, hypnotic vocals, stabs of synthesiser and gliding, liquid guitar breaks, all subtly dipping in and out of view, until at the closure of the song, an unexpected swirl of strings appears before abruptly giving way to a jazzy piano solo. There’s a lot going on here, but it all feels quite deliberate, and structured to maximise the atmosphere.

Both the aforementioned singles, Troubled Girl and Devil Doll, are included, with the latter arguably the high point of the album. It’s pure Portishead, with almost every element – the spy movie soundtrack vibes, the gently funky flickers of guitar and the languid beats – present and correct. And while singer Asia is no Beth Gibbons (who is?) her smooth, mellifluous voice is nevertheless an agreeably sultry substitute. Just Me and You is another standout, with Asia’s vocals multi-tracked a cappella style to deliver a richly harmonic, haunting experience.

Good Songs for Bad People maintains a high standard almost throughout, but it does tail off a little disappointingly at the end. Live Free and Die When It’s Cool, with band mate Chris given vocal duties, is undoubtedly the weakest track here, and the glacial, spacey, near-five minute Standing Where You Left Me is a slightly plodding close. Nevertheless, this is a highly promising first effort from an intriguing band, one that repurposes its core influences rather obviously but undeniably does so extremely well.