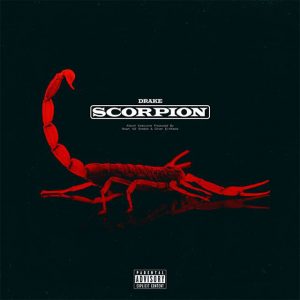 With all the attention on Kanye West’s slew of strikingly short albums, it’s easy to forget that the bigger trend in rap/R&B releases has been towards excess. Migos, Jhene Aiko, Rae Sremmurd and Chris Brown have all released albums longer than 80 minutes in the past year, and Drake joins them with double LP Scorpion. The idea is that disc 1 is his rap side and disc 2 his R&B side, but since he often raps with a sing-song cadence and sings with a rapper’s flow, this can become a distinction without a difference.

Disc 1 gets going with the trap banger Nonstop featuring heavy bass, an obscure Southern rap sample for a hook and some ever so slightly goofy ad libs. After marvelling at his fame on the less interesting Elevate, Emotionless gives the tabloids what they’ve been waiting for: a response to Pusha T’s diss track The Story Of Adidon and its allegation of a secret child. His argument that he “wasn’t hidin’ my kid from the world, I was hidin’ the world from my kid” seems completely valid in light of the unwanted media attention his child’s mother has received, and it’s been a while since PR damage control has sounded this good.

Later on comes a section in which Drake tries to bolster his street cred, resulting in the low-key triplet flows of Mob Ties and the baffling hook of Can’t Take A Joke. Neither of these discs are perfect by any means, both suffer badly from filler, but disc 1 is considerably more digestible and fun. The R&B side mostly lives or dies by how much you care about Drake’s rumoured love interests (Jorja Smith? Rihanna? Bella Hadid?) and there aren’t many hooks or notable lyrics to speak of.

Nice For What is an exception, its infectious New Orleans-influenced beat and lyrics about female empowerment making it an instant highlight. It is much more uptempo than the tracks around it, and while In My Feelings tries to recreate the same vibe later on – with a brief appearance from City Girls and a Lil Wayne sample – it just comes off as chaotic. Summer Games has interesting production that can best be described as tribal synthwave, but Drake doesn’t stray from his tedious comfort zone or bring anything worthwhile to what could have been a very promising track.

There aren’t many full guest verses on Scorpion but both of them outshine Drake. Jay-Z wraps up Talk Up with fiery lines about Donald Trump (“I got your President tweetin’, I won’t even meet with him / y’all killed X and let Zimmerman live, shhh, streets is done”), while Ty Dolla $ign continues his run of impressive appearances on high profile albums with his contribution to the smooth After Dark. Don’t Matter To Me seems to have mainly been created to allow for a Michael Jackson hook, and is completely forgettable despite the feature.

The logic behind this spate of longer albums is simple: more tracks means more streams, which means more revenue and a higher position on the albums chart for the same level of engagement. This is possibly why Drake has been so prolific lately, with five full-length solo releases in as many years. Either way, it also means that expecting consistency from an album like this is a mug’s game. There are good tracks here, about 35 minutes’ worth, and the plus side of streaming is it’s easier to isolate the songs you like. But between the sprawl of Scorpion and the concision of Daytona, it’s clear Pusha T’s won the battle and the war.