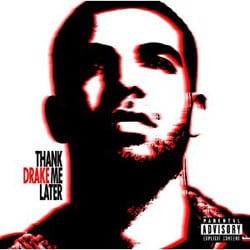 The title of American rapper Drake’s debut album is a knowing nod to the fact that he may well single-handedly save the American music industry. At a time when sales of about 10,000 could easily give you a Top 10 album, Thank Me Later is headed for over half a million in its opening week. Yet there’s a general sense that Drake, aka Aubrey Graham, is not what you’d call a likely rap megastar, what with him being a former teen TV star in Canada and having never been shot, a la 50 Cent.

Somehow, despite this lack of dubious credibility, Drake has been able to create a massive buzz via one EP, the brilliant So Far Gone. It helps that the current rap impresario, Lil Wayne, signed him to his own label, Young Money, and that whilst his boss is in prison he’s seen as the torch bearer for rap’s future, both artistically and commercially.

As with Kanye West – who produces two tracks here – Drake makes hip hop that relies heavily on modern-day R&B as well as adding a huge pop sensibility. Lead single Over may feature booming beats and tense strings, but it also houses at least three hooks, the best of which is the telling, “I know way too many people here right now that I didn’t know last year / Who the fuck are y’all”. Thank Me Later is built on the idea of paranoia; Drake is worried about who is friends are, of how long fame will last and about how money changes things. It’s an album that deals with the problems of fame before fame has really struck, just like Eminem‘s Marshall Mathers LP foresaw the controversy that followed that album’s release.

“Money just changed everything / I wonder how life without it would go” is how he chooses to start the album on the brilliant Fireworks, a track that, musically speaking, makes up for the moping lyrics and makes the urge to slap him for being so miserable recede ever so slightly. Over simple, echoey drums and rising synth lines, it unfurls from sombre verses to a joyful chorus that’s augmented by a lovely vocal from the omnipresent Alicia Keys. Elsewhere, Fancy is a fizzing blast of looped samples, backwards strings and Drake’s speedy flow, whilst the Kanye-produced Find My Love could have fallen off West’s own 808s & Heartbreak album, Drake swapping rapping for a heartfelt croon.

There’s much to admire about the 23-year-old’s debut, but as it moves towards the 50-minute mark the pattern of booming, echoey beats mixed with Drake’s solipsistic lyrics begins to tire, and you can’t help but think that the 15 tracks could have been trimmed without losing any of its appeal. But in amongst the filler of the album’s latter half, he still manages to hold his own with Jay-Z on the pounding Light Up, and sit back and admire ‘Lil Wayne’s oddly compelling flow on Miss Me. Self-obsessed, paranoid, fleetingly spectacular and always interesting, Thank Me Later does indeed mark the arrival of rap’s newest superstar.