by Martyn Young
published: 6 May 2016 in Album Reviews
Tweet 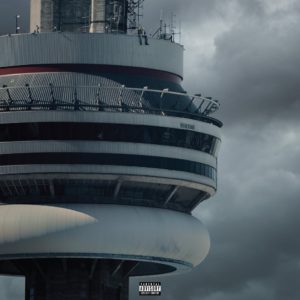 A unifying trend among all the biggest crossover rappers of the last decade is their single-minded creative spirit and boundlessly productive creative energy, an energy and influence that has allowed them to set their own musical course and shape the future direction of hip-hop.

Arguably no other rapper has quite set the tone for hip-hop’s direction in the last decade than Drake, who has now unequivocally reached that upper echelon of superstardom to such an extent that he is now almost omnipresent, existing online in a world of memes, gossip, leaked tracks and hype. In a word, he’s a phenomenon.

Views is album that strives to cement his phenomenal status. It’s the fully-fledged superstar grand statement. Unfortunately though for Drake, it’s an album that proves that, with unparalleled success, the danger of self-indulgence and treading water lurks ever more prominently. Formerly, and until very recently, titled Views From The 6, Views is Drake’s fourth studio album but follows perhaps the most intriguing and challenging Drake release, 2015’s If You’re Reading This It’s Too Late mixtape. Views shares some musical similarity with that release but instead is mired in a strangely one-paced, monotonous atmospheric dirge that hangs over the record like a dark portentous cloud much like the one from which Drake gazes out over atop the CN tower in his much loved home city of Toronto, which features as the album cover.

Views is insular and introspective. It dives punishingly deep in to his psyche and his city which he reveres and champions. For Drake, the 6 world is all that matters. Themes that have been present throughout Drake’s material are again present. No one who is a familiar follower of the rapper will find anything unusual or disconcerting here. The album slowly lurches into focus with those familiar pared-down beats of regular producer Noah ‘40’ Shebib, who again produces over half the tracks here.

Keep The Family Close is an opening statement that emphasises the importance for Drake of family and where he comes from. The family can be blood related, or it can be extended family in his OVO Sound crew, who feature prominently throughout the album. Indeed on the later track Still Here, Drake provides a celebratory rousing shout out to his crew and his city admonishing any coat tail riding impostors: “Me and all my niggas doin’well, doin’ well, dog, you not from the city, I could tell, I could tell, dog.”

Relationships and his complex relationship with desire, infatuation and fame again provide the most common thread in Drake’s music. U With Me? finds him confused and isolated, while Redemption is infused with anger and bitter scorn as Drake runs through his complicated relationships with women in his past, namedropping Erica Lee who sued him for featuring her voicemails on Take Care’s Marvin’s Room without credit. The fact that all these reflections on past relationship troubles are almost uniformly set to dark, dirgy beats and delivered in predominantly the same emotionless tone makes them hard to fully engage with and even harder to love.

The best moments on VIEWS come when a difference voice appears and a precious moment of light is let in. You yearn for some of the frequently clever and masterful use of samples to be given a more prominent role. The reflection of Drake’s youth in Toronto Of Weston Road Flows is given a sublime twist with a sample of Mary J Blige’s 1994 classic, Mary’s Joint. Elsewhere, another 94 RnB slow jam, Brandy’s I Dedicate (Part 1), is used to wonderful effect on Fire & Desire. As well as the use of sampling, one of the redeeming features of the album is the use of guest vocalists and features. The best of these is Too Good, featuring Rihanna. One of the few obvious radio hits on the album, it features everything a great pop song should have. It’s hard to understate the warm feeling of joy that spreads through you when Rihanna comes in with the chorus hook.

To less sweet effect but no less exciting is Future’s guest rhymes on Grammys and the wonderful funky house swing of Kyla’s Do You Mind which forms the basis of the number one single One Dance. No matter how morose and introspective his music gets Drake never wants for hit singles. The subtle thread of Caribbean dancehall and afrobeat is the obvious highlight of the record, the beguiling patois inflected Controlla featuring Beenie Man is particularly thrilling. It’s a direction that you hope Drake might explore further in the future as explores his world view and the multi-cultural aspects of his city even further.

Despite some intriguing musical excursions though Views is very much the Drake record in excelsis. It’s staggeringly long at 20 tracks and 80+ minutes, and is a grind for even the most ardent fan to get through. There are enough moments of glory and splendour here to validate Drake’s position at the head of the hip-hop table, but you wonder whether he can stay there much longer without doing something drastically different.