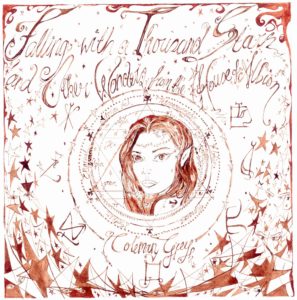 Dylan Carlson, aka Drcarlsonalbion, is never one to do things quickly. In Earth, his most well-known band/project, he redefined metal through a filter of drone, boiling it down to primal, slow moving ooze that made Black Sabbath’s low-slung stoner riffs seem as if they were speeding their tits off. When he returned from hiatus, Carlson turned his slow-mo guitars on Americana, the sounds of the desert, and folk and in doing so found Earth redefining music once again.

This release which has seemingly been in production for an eternity since beginning as a crowdfunded project some time ago, finds Carlson expressing his love of old British folk and folklore. More specifically, he’s been examining the interaction between humans and faeries or spiritual beings and the ancient folk music of the British Isles. Evidently, he’s been trekking down the same road and encountering the same supernatural beings as Pentangle and Fairport Convention, two of the bands that have been influential on his work during the Angels Of Darkness period.

Folk tales are a fascinating melting pot of mysticism, satire, wonder, elemental truths, and occasionally extreme brutality. For anyone wanting to look into the construction and meanings of faerie tales, Bruno Bettleheim’s The Uses Of Enchantment is a fantastic starting point. However, Carlson presents these interpretations without vocals, essentially removing the story and leaving the music to speak for itself (and if they’re so inclined, his audience might have to do a little research). In a sense, this is an album that looks to a time when music not words was a key form of communication. It is down to Carlson’s skill as a composer to not only bring these songs to life but maintain their historical value and sense of place too.

Celebrations of cunning and skill succeeding over brute strength are always welcome, and it is perhaps apposite that this collection of songs opens with an interpretation of Reynard The Fox, a story that does just that. Carlson might have embraced volume and heft with Earth 2, but in recent years, it’s been his nuanced work that has really resonated and in a sense, the spidery, intertwined guitar lines confirm the cunning at the heart of his musical progress.

She Moved Thro’ The Faire and Rose In The Heather are more in keeping with the compositions that inspired them and their Celtic roots are more than evident. On She Moved… his droning guitar parts take on the thrum of bagpipes as they underpin a wandering guitar exposition, Rose In The Heather meanwhile, exploits familiar Celtic motifs and applies a hazy filter.

At the heart of many of these tales of human and magic sprite interactions there are dark intentions afoot. Whilst not explained explicitly in words, these themes are evident on tracks like Tamlane where the brooding guitar tones take on sinister forms as the same few notes are worked and reworked into new shapes. Alisson Gross, a tale about a hideous witch that turns a knight into a dragon (or worm) is a slow drawn out exploration of drone and the steady application of a simple guitar motif. It’s simply miles away from Steeleye Span’s version.

The Elfin Knight’s tale of riddles, abduction and cunning retains the Celtic elements that can be found in versions by the likes of Kate Rusby (and at a stretch in Scarborough Fair), but Carlson’s guitar takes this version into truly daunting territory. It’s here in particular that he foregrounds the resonance of his guitar as his chords pulse and threaten to break into feedback. His guitar lines feel like the beating heart that keeps these traditional tales alive, the droning truth at the heart of existence and the highland fog that hides the mythical beasts of faerie tales so well. These might be relatively minimal compositions, but full immersion in them leads to some truly magical moments.