Dream Wife – So When You Gonna… 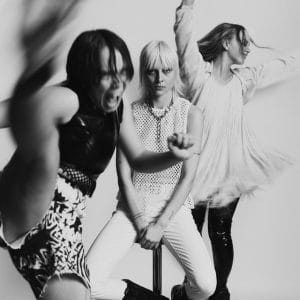 Dream Wife are a force of nature not to be reckoned with. After the Brighton trio’s self-titled debut release in 2018 much more was expected to follow from the playful experiment of explosive Riot Grrl punk with dreamy pop overtones. The follow-up So When You Gonna… is a creative exploration of the experimental, with its roots in the heart of rebellious punk-rock riffs and the challenging of the status quo. It stands proud in the art-school alternative, and the art-school bands of the 2000s are an influence on their aesthetic and sound; the loose dreamy vocal style of the band’s Icelandic-born vocalist Rakel Mjöll compares well with the likes of Life Without Buildings and Yeah Yeah Yeahs.

It is difficult for bands to follow up on such a highly acclaimed debut album; to repeat the same plaudits amid pressure to make an instant impact all over again. Yet Dream Wife go above and beyond with a record that politically embodies a movement that overthrows boundaries. It would be too flippant to say that this is just another protest record, for here is an avant-garde experiment that gets across a political message wrapped attractively in pop tones.

Dream Wife have been key supporters of the changing position of women and trans/non-binary issues, and with this focus, the band covey an empowering message. Rather candidly in a recent interview the band claim “Just because we have vaginas doesn’t mean we are a ‘girl’ band”, and the non-binary acknowledgement is made clear in the lyrics, but in a comedic way. In the opening track Sports!, Mjöll opens with “Fuck. sorry. Fuck. Please will you so kindly start again?” summing up in bellicose manner the dread awkwardness of mispronouncing someone’s preferred pronouns.

Sports! Is packed with aggressive sounds of Riot Grrl, with influences from Le Tigre recognisable from the off. The song’s backing vocals “These are the rules” aptly describe the real aim of the game of Sports! – a fun poke at the stardom and status of well paid sports stars, so many of whom are men.

Mjöll’s vocal style closely resembles Yeah Yeah Yeahs’ Karen O, leaving Hasta La Vista comparing favourably with Yeah Yeah Yeahs’ classic Heads Will Roll as it creates a transient pop feel amid a whirlwind of gritty riffs and tight drums. Elsewhere, Validation echoes a sentiment of teenage youth, the struggle of finding the one who represents you. It is a song about the pleasures of not fitting in, while paradoxically being able to fit in only at certain locations – chiefly art galleries and cemeteries.

Temporary brings a much lighter mood, but again sports some comedic melancholy aspects. The song feels more like the reflections of a bedsit diary writer, perhaps taking its cue from the early sounds of The Smiths, but contains bittersweet lyrics like “How is it alive unless it’s temporary?”. The most exciting track – the title track – is a lightning bolt that deals with intimacy and same-sex relationships. The angry riffs make sure the frustrated sentiment is realised by the listener. The album concludes with After The Rain, an ballad that stands in contrast to the previous 10 guitar-laden tunes. The ambient sound of rain rises from the background to the foreground and plays out an album worthy of much praise.

So When You Gonna… sets Dream Wife up nicely as a radical band their day, actively engaging with the major issues at hand, progressive in their sound and statements, and making the case for re-evaluating how gender is viewed in the music industry and beyond.