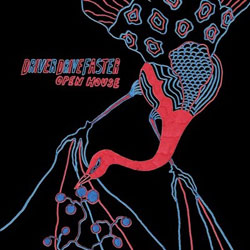 It’s a rare thing when you come across a chorus that lacks insimplicity but still manages to root itself in your head for days.This is the triumph of Driver Drive Faster and their song It’sAll Over It’s Everywhere. Never underestimate the power of a goodchorus. The one mentioned above marks the exact moment when you beginto immerse yourself in Open House’s charms.

Choruses were always going to be this band’s speciality. Morefamiliar to some under their former guise, Polytechnic (the line-upremains the same with the exception of a new drummer), Driver DriveFaster don’t so much re-shape their previous mould as give it a coupleof tiny additions; most notably maturity and a penchant for packingtheir songs with a dense array of textures. But choruses, like thoseon Polytechnic’s only album, Down Til Dawn, continue to reap havoc.

Between winter 2008 – the time when Polytechnic dissipated – andthis summer, the group have evidently honed their craft, shying awayfrom an “indie” tag that lumbered the previous outfit and heading moretowards an experimental, progressive application of guitars, in linewith Field Music and The Phantom Band more than anybodyelse. Open House’s songs are embellished with layer upon layer oforganic instrumentation; fluttering pianos; fidgeting guitarstructures; the whole piece often becomes a delectable treat. In thesame degree as their contemporaries, the sheer attention to detailamounts to the band being viewed as this intelligent being. You sensedit with the former ensemble – these guys are smart, sharp and theyknow what they’re doing. These facts become glaringly evident as thealbum gathers pace.

Lacking a concept of a continuous charge, the album actively jumpslike a frog over lily pads from one sonic adventure to the next; thegroup boasting robust horn-sections for A Mile Back and a FionnRegan-like delicate and withered touch for One Last Look.Beforehand, highlights come in the shape of the sedated Bowie-esquechants of Don’t Fall Apart and the barrelled cries that define MissingOut’s chorus. If anything the band try to explore too much within onealbum, seemingly losing focus from time to time as tracks struggle toconnect with one another. More than anything, Open House comes acrossas a plea to be taken more seriously. Like The National‘sAlligator – an album determined on making a point – Driver DriveFaster seem focused on battering away the cobwebs of their somewhatunsuccessful past and exhibiting a myriad of clever tricks.

This is all well and good but in going for the kitchen sink, OpenHouse tends to steer off course. Instead of working well as a flowingcollection, it mimics an extrovert, eclectic art gallery where whilstall the work is admirable and respected, not everything accounts foryour taste. Nevertheless, one perpetual element of the album is astrong chorus and these will inevitably lead the listener back severaltimes over.