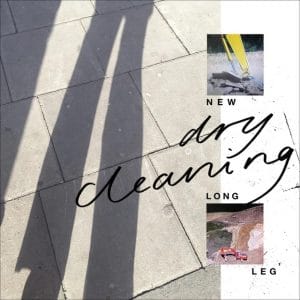 So it turns out that the current nexus of postmodern rock and roll is a carpet warehouse in Catford. The inconspicuous shag palace, located on Rushey Green Road and called Dourofs, was the venue of choice when it came time to record the video for Dry Cleaning’s just released Unsmart Lady single.

The second clip to drop from New Long Leg, their much anticipated debut on the legendary 4AD label, it features the diminutive Eltham quartet locked in the store one damp night, addressing misogynistic etiquette and lopsided beauty standards on the shop floor, amidst the endless rolls of beige discounted underlay.

Mentored and recorded by the watchful eye of John Parish at Rockfield Studios last June, on opener Scratchcard Lanyard, an array of sprawling guitars (and by that we mean they rage and faint evoking Lee Ranaldo and Thurston Moore’s sloppily dynamic soloing on Sonic Youth’s The Sprawl) thrum and jolt together on the tense number beneath the sternly laconic inflections of front person Florence Shaw.

Bonding at art school with lead guitarist Tom Dowse, visual artist and picture researcher Shaw’s lyrics, on their Sweet Princess and Boundary Road Snacks and Drinks EPs from 2019, were seized from the comment sections of favoured ambient electronica tracks on YouTube. Here, redolent of Sneaks’ Eva Moolchan’s deadpan cadences, they appear to be drawn from random conversations and visual observations, a laconic Shaw delighting in the banality of oversharing.

Much as those initial self-releases bore the pent up discomforted claw marks of having being written and recorded, sardine like, in the cramped garage that belongs to bassist Lewis Maynard’s supportive mother, so the gravitas and anticipation of proper label attention is reflected across the expressive surface of this beguilingly mannered record. The protagonist of Scratchcard Lanyard, for example, has reached a stalemate in her life, not depressed but lacking structure, and so she now explores new creative avenues, such as ceramics, knitting and dancing in order to recapture some kind of self worth.

A postmodern Jeanne Dielman, she innocuously daydreams of eating hotdogs on Strong Feelings, curses having to clean the grill pan on Leafy, and on the titular New Long Leg she wonders rhetorically if there will be a hairdryer or shampoo provided on the forthcoming cruise holiday she’s booked. Then on John Wick, named for the rapidly diminishing Keanu Reeves cinematic franchise, she remarks on the revamped Antiques Roadshow, cites urinary mishaps in her local Sainsbury’s and admits to lusting after men she sees in stock photos.

Spellbound by her near comatose delivery, the majority of the didactic record wrestles with skeptical alienation and successively tense first-person behaviours. Articulating those doubts gets tougher by the time they reach the sunny More Big Birds, its puzzled narrator giving up and giving in to a stream of da da da’s for its limply hung chorus. The shifting smudges of feedback that annihilate closing track Every Day Carry finds them exercising their collective muscle one last time. Displacing the emotional in favour of engagingly tenuous perspectives, this precariously magnetic album, much like the contents of Dourofs, will absolutely floor you.