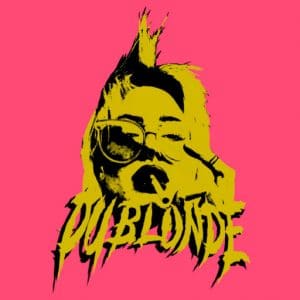 It only seems like five minutes ago that Beth Jeans Houghton appeared with her band, the Hooves Of Destiny, but it was actually nearly 10 years ago. In that decade, she’s rebranded herself as Du Blonde and embarked on a side career in music video direction and comic book art.

Homecoming is Houghton’s third album under the name of Du Blonde, and feels like her most focused, consistent record to date. It’s an album full of short, snappy garage songs (the majority of which are about two minutes long) but it slightly reductive to describe them as such.

For, while many of Homecoming’s tracks do feel like a quick adrenaline shot to the ears, there’s a lot going on underneath. While a full-throated belch may open the album with introductory track Pull The Plug but the song itself is a pulsating, raw look at coming to terms with anxiety.

Musically, Houghton is spinning a lot of plates. Smoking Me Out manages to mix distorted lead vocals with’60s girl-group backing singers, while All The Way (featuring Ride‘s Andy Bell) constructs a glorious wall of sound. She also accommodates an impressive roster of guest stars without sacrificing her own personality – with Garbage‘s Shirley Manson adding vocals on Medicated, while the marvellously named feminist punk band The Farting Suffragettes feature on I Can’t Help You There.

Despite the weighty subjects addressed on Homecoming (as you’d expect with Houghton being a prominent mental health advocate, topics such as anxiety and depression are covered), there’s a massive sense of fun running through the album as well. Nowhere is this clearer than on I’m Glad That We Broke Up, a short, spiky duet with Ezra Furman which lasts just over two minutes and has a sly pay off in the chorus (“and I’m glad that you’re back”). It’s so full of life that you’ll want to play it again as soon as it ends.

Despite the album’s breakneck pace, there are more reflective moments. The closing track, Take Me Away, is more like a torch song than a guitar anthem, a mournful anthem about the paralysing effects of anxiety (“I look at the pile of clothes on the floor, I think about dressing, and then I lay down and think more”). It’s a fine closer to the album, the hushed quiet after the frenzy of the previous half-hour.

While Homecoming could hardly be described as a massively commercial record, it’s certainly Du Blonde’s most accessible album to date, and the short running time means that it never outstays its welcome. If anybody is looking for an alternative soundtrack as Spring starts to appear over the next few weeks, Homecoming is as good a choice as any.