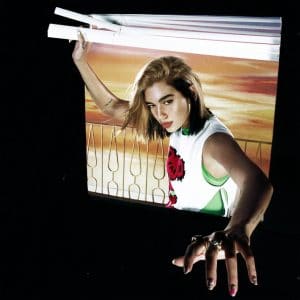 Since bursting onto the music scene in 2016 with her highly contemporary fusion of synth-pop and R&B, Dua Lipa has released a shedload of chart-bothering singles and a unit-shifting self-titled album housing them, along with her trademark sultry sass. Her first single Be The One was a game-changing pop anthem championing self-belief and perseverance. Her first solo UK number one came with the tremendous tropi-pop EDM banger New Rules, a canny crossover heralding female empowerment in the digital, social media and smartphone era. She announced work on her next endeavour at the beginning of 2019, and the pop world has been waiting with breath that is bated ever since.

Preceded by the Moloko-esque nu-disco treasure Don’t Start Now and the filthy bass of dark pop-rock stomper Physical (think iconic Pat Benatar mashed up with the genius of Madonna‘s Hung Up), the tone for second album Future Nostalgia has been set with themes of moving on, empowerment and equality. The title track, which opens the album, is a confident and brassy electro-funk call to arms for female alphas, with shades of Daft Punk at their most deft and disjointed, as well as a nod to Daydream In Blue from I Monster. There is a bold and seductive determination in Lipa’s voice that is at once empowering and also irresistible.

Lyrically the album’s blueprint is one of empowerment and emancipation, whether this be kicking an ex to the kerb, like on Don’t Start Now, or having a damn good old time, as with Physical. The unashamed and frank Good In Bed jars a little against the rest of the album, but perhaps this is Lipa’s message; women should be able to talk about getting “pipe in the moonlight”, just as men chronicle their conquests, as she takes on Danny Zuko’s Grease narrative in Summer Nights with deadpan fervour.

There are nods and references to Lipa’s influences throughout the album, yet not to the extent where this is overbearing namechecking. You get the sense that Lipa is not a conduit, but rather she’s in the driving seat and this car is not an automatic. Break My Heart is a thumping mash-up of The Cardigans‘ Lovefool and INXS‘ Need You Tonight. The down-tempo spasmodic jam of Pretty Please echoes Brandy‘s Full Moon, and Levitating is a lyrical deconstruction of Blame It On The Boogie evoking Outkast‘s Rosa Parks, although it can come off as a funky caffeine and sugar overdose. With Stuart Price on production duties, Hallucinate has us on the ’90s dancefloor with more than a nod to Madonna’s Impressive Instant, and Love Again samples one hit wonder White Town‘s Your Woman to slapping effect while channeling some of the more sullen Confessions On A Dance Floor vibe. It’s a highlight.

One of Lipa’s most shining moments is on the album’s closer, the affectingly gospel and anthemic Boys Will Be Boys. This is a treatment of sexual harassment with some visceral lyrical punches that Pink would be more than proud of: “Isn’t it funny how we laugh it off to hide our fear? When there’s nothing funny here” Lipa sings, as she decries the dangerous and inveterate mantra of “Boys will be boys” and reels off dishonourable scenarios that women have to combat in their daily lives, causing them to grow up faster.

Lipa decided to bring forward the release date of Future Nostalgia, when other artists have decided to delay big releases, and it proves to be a visionary antidote to uncertainty and isolation and a world under siege by coronavirus. One lyric from Cool in particular is relatable: “I guess we’re ready for the summer.” Put on your legwarmers and some neon, for it’s time to dance away our fears while nobody’s watching. This vibrant, audacious collection of pop bangers signposts the way.