Dum Dum Girls – Only In Dreams 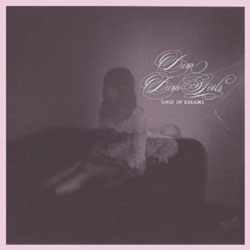 Cast your minds back to late 2009/early 2010 and you’ll surely remember the sudden burst of lo-fi, girl fronted groups. Best Coast were the blogosphere’s darlings, Veronica Falls demos started to surface, and the first Dum Dum Girls record was released. Considering Camera Obscura did their own take on the retro/rough around the edges/fuzzy female led pop song on If Looks Could Kill, off Let’s Get Out Of This Country way back in 2006, quite why blogs seemed so keen to fashion a scene as late as 2009/2010 remains a mystery).

The first Dum Dum Girls record was a breath of fresh air to those who felt that the Best Coast album was a bit stodgy, sludgy and samey. I Will Be was a short, sharp shock that at times felt like a reincarnation of the first Ramones record (though a female fronted Ramones, obviously). Good as it was, however, it was hard to see it forming a long-term artistic direction. Enter second Album Only In Dreams. As the album is peppered with lyrical themes depicting the emotions one feels following the death of a loved one it would be easy for the record to take on a somewhat maudlin direction, but instead retains a remarkable vibrancy throughout.

From the outset it’s clear that it’s a more polished offering than its predecessor. Opener Always Looking careers out of the trips underpinned by a menacing guitar line reminiscent of Link Wray, demonstrating a swaggering confidence that permeates throughout the album and belies the aforementioned lyrical themes. It’s a trend continued with the soaring Bedroom Eyes, with its instant, catchy guitar melodies and stunning chorus and middle eight.

Further evidence of the album’s richer sound yet instant, accessible pop songs can be found courtesy of In My Head and Caught In One. The former once again arrives with a killer middle eight in its armoury (something of a trend throughout the album as a whole), while Caught In One manages the impressive task of combining chiming surf-pop hooks with a bridge that intones that “this year’s been a drag/who knew it’d be so bad?”. It’s Madness levels of combining the happy with the sad, and brilliantly so.

The album does take a break from catchy surf-pop to – understandably, some might argue – take in two slower numbers. Coming Down is a magnificent, towering slice of Spector-esque wall of sound production and emotive balladry. Album closer Hold Your Hand lays bear perhaps the most direct lyrics regarding the album’s themes of loss whilst never wallowing in self pity or appearing overly mawkish.

The record has taken adversity and chosen to stand atop it, looking to the future instead of being buried beneath its weighty pressures. It showcases a remarkably assured collection of songs (at times sounding like The Long Blondes do surf-pop – in no way a bad thing) as well as a real depth and maturity to songwriting that dwarfs the offerings of its home-recorded predecessor. The old adage of ‘what doesn’t kill us makes us stronger’ may seem like an old cliché, but where Dum Dum Girls’ artistic direction is concerned never has a truer word been spoken. Superb.