Duran Duran – All You Need Is Now 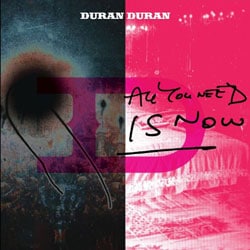 As a band who, even in their shiny, gold-drenched ’80s heyday, were never known for their albums, it’s fair to say that All You Need Is Now wasn’t exactly eagerly anticipated. Over the last couple of decades, with the exception of 1993’s Ordinary World, their singles have gone largely unnoticed too, and Le Bon and co seemed resigned to spending the twilight of their career peddling tired sounding ballads.

So their 13th studio albums comes as a shock… because it’s really rather good. Produced by self-confessed Duranie Mark Ronson, he’s taken a risk by playing it safe. Rather than pushing them towards the reinvention they’ve been striving for for so long, Ronson’s taken them back to their golden era to create “the imaginary follow up to Rio that never was”.

Their second album, released in 1982, spawned some of their best loved singles; Hungry Like The Wolf, Save A Prayer and the era-defining video for the record’s title track. Its actual follow-up came a year later in the form of Seven aAd The Ragged Tiger. That record’s opening track was Reflex, but on the whole the electro hyper-pop that had been their niche was already being done better by others.

Reclaiming that sound for his heroes, Ronson has taken the things that made Duran Duran exciting and turned them up a notch or two.

All You Need Is Now is bold and unapologetic; a solid slice of power-pop that’s unmistakably Duran Duran. Safe features vocals from Scissor Sisters‘ Ana Matronic, and taps into the disco-groove of Rio and Girls On Film. Runaway Runaway and Girl Panic! replicate the clattering busyness and singalong choruses of their biggest floor fillers. Other highlights include super up-tempo Blame The Machines and the album’s title track, while Leave A Light On and The Man Who Stole A Leopard, which features vocals from Kelis, provide moments of relative calm.

Ronson has faithfully returned them to form; they’re still not an albums band, and this is certainly not without its fillers. Other Peoples Lives is a cringey attempt at social commentary, and Mediterranea is just plain dull but, despite being well into his 50s now, Le Bon’s voice sounds as confident and unwavering as it ever has.

All You Need Is Now is unlikely to win over any new fans, but it might reignite or validate forgotten guilty pleasures and, for Duranies, it’s an album to sit alongside its older relatives with pride. After decades spent striving for credibility, with All You Need Is Now, they might finally achieve their goal the moment they stopped trying.