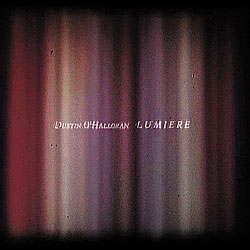 Berlin-based Californian Dustin O’Halloran is something of an old hand at this neo-classicism lark, having made his initial imprint as far back as Devics‘ 1996 debut LP Buxom.

The intervening years have seen his credits grow from contributor to composer: two solo piano albums – in 2004 and 2006 – soon paved the way for a featured spot on Sofia Coppola’s Marie Antoinette soundtrack and, ultimately, responsibility for the musical aspects of 2009 indie flick An American Affair.

Cinematic, you see, is an adjective that lends itself to O’Halloran’s mode – even when divorced from the big screen – and it’s a manner he’s keen to flesh out having acquired the services of an assembly that includes the likes of Adam Wiltzie, mixer J�hann J�hannsson and sometime Grizzly Bear, Max Richter and Owen Pallet collaborators ACME Ensemble.

Lumiere, however, is no self-congratulating indulgence: from the very earliest strains of A Great Divide – a six-minute smoulder in which delicate piano flourishes contrast against ethereal drones and the most mournful of strings – there is an air of patience abound, an understanding that high order composition speaks for itself, and that the rich, layered qualities of ensemble neo-classicism are not mutually exclusive with O’Halloran’s established less-is-more philosophy.

Opus 44, indeed, takes up the strand in solo fashion; O’Halloran, his touch light on the ivory keys, embarks on a gentle cascade that bears timeless qualities despite its brief stay.

But it is compositions like We Move Lightly that more fully encapsulate Lumiere’s beauty. It is, in essence, a rather simple, swift and repeated piano melody, but one that resonates immeasurably further with the presence of the subtlest of string swells; a texture that replaces the measured silence of the soloist.

Similar interplay lends warmth to Quartet No 2, a movement whose minor key might otherwise court detachedness, while Fragile No 4 crescendos elegantly from youthful simplicity to the sound of world-weary grace. Each track seems to yearn to score a scene not as yet willed into existence.

Which is not to suggest that O’Halloran is simply playing John Barry to make-believe movies: there is exquisite technicality beneath the hood, with the album’s axis pairing – Opus 43 and Quintette No 1 – indicating a willingness to introduce new patterns and sub-themes well after the establishment of initial melodies strong enough to see out the longest of passages.

Such tinkering is tempered – no Gonzales-style missiles from leftfield here – but sufficiently pronounced as to prevent wholesale shifts into ambient mood music.

Still, such gorgeous-if-melancholic chamber music does not lend itself particularly well to out-of-sync listening, and one is not recommended to just dip into Lumiere: bereft of an implicit aural narrative, a number of the album’s constituent parts lose identity. Snow And Light, for instance, becomes uneventful background music rather than the serene conclusion to a cohesive whole.

Such gripes, though, matter not for O’Halloran, who in Lumiere has surely fashioned a classic of the genre and the finest of testaments to his considerable talents.