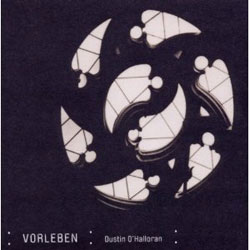 Dustin O’Halloran forms one half of the uncategorisable duo Devics, but in tandem with this he also has a flourishing career as a solo artist, both composing and performing neo-classical piano music of elegance and beauty. Recorded in concert in a church in Berlin – the current home town in O’Halloran’s itinerant lifestyle – Vorleben is a performance of pieces from his first two solo releases, 2004’s Piano Solos Vol 1, and 2006’s Vol 2, with two other non-album tracks from around the same time also featured.

The opening piece, and indeed the second that follows it, set out O’Halloran’s stall as a performer of stately beauty. Opus 54’s clear piano chords sing out and weave around, while Opus 7 is full of its own quiet drama. Here also we see the device used to such great effect also in Opus 15, Opus 38 and Opus 37: a ponderous suspended hesitation before the next note or chord is struck, adding not only a sense of suspense but also the impression of some near-overwhelming emotion.

O’Halloran’s use of dynamics adds to the sense of atmosphere of each piece. In Prelude No 3 he lets the note sequences almost ebb away to nothing, before coming back forcefully, strong and true; the uplifting, crest-of-a-wave segments featuring uplifting high trills of melody that chime through. Opus 21 is alternately loud and quiet, quick and slow, heavy and soft; like an Eastern European folk waltz interpreted by piano alone. The last piece, Opus 37, slows and quietens until it is almost imperceptible by its ending.

O’Halloran’s music has in the past been used in film scores (notably in Sophia Coppolla‘s Marie Antoinette) and you can hear, particularly in the drama and beauty of Opus 15 and Opus 23, why this music would work well in such contexts. The latter track, a highlight of the performance and therefore this album, has at its centre a melody of great beauty; elegiac, sad, memorable. As it is repeated and modified – now an octave higher, now slightly improvised from the original – it seems to almost sing straight out of the piano. A really remarkable, moving piece.

There are several small reminders of the live nature of the performance. Despite the note-perfect playing, this is very obviously not a studio-recorded album. Muffled noises and the faint sound of background atmospherics recur, more evocative than distracting. An audience member shuffles in their seat (pew?), half-stifled coughs echo through the church from time to time, and – at the end of Opus 37 – appreciative but sedate applause fills the space recently vacated by its dying bars. The applause is well deserved for this most talented composer and performer.