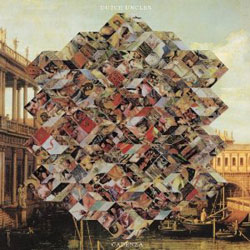 Wikipedia defines a “cadenza” as “generically, an improvised or written-out ornamental passage (..) usually in a ‘free’ rhythmic style”. You only need to hear a small amount of the music produced by the Mancunian Dutch Uncles to appreciate just how apposite a choice it was as a title for this their second album.

This is a band that play fast and loose – exuberantly – with time signatures and beats. Tracks are frequently tricksy and irregular: from Cadenza and Sting’s staccato piano-plus-bass interplay to the spiky guitar jangle of X-O, or Dolli’s curious vocal-harmony-driven rhythms. The latter owes a debt to Laurie Anderson‘s Oh Superman, undoubtedly, while other musical similarities can be heard in the Stayin’ Alive-alike guitar riff in Orval, and Fragrant’s Futureheads-meet-Everything Everything quirks.

Clever, then, and experimental (parts of Cadenza almost sound improvised, whilst OCDUC brilliantly mimics “the sound of rain” being sung about). But what elevates this album beyond the simply cerebral is the simultaneous pop sensibility that pervades through it. Cadenza, Fragrant, Dressage and X-O are all hooky, memorable, and despite their complexities still eminently sing-back-at-the-radio worthy. Dressage in particular benefits from not only having one of the most appealing and distinctive tunes, but also a warmth and expressiveness in the vocal not found elsewhere.

The lead vocal, in fact, is the one element in the mix that sometimes palls. Frustratingly insipid (Cadenza) or almost drowsy sounding (on the otherwise magnificent Dolli), by the time we get near the album’s end – in Orval – it has become something of an irritant. Instead it is left to the music – from the tinkling music-box chimes of Dressage and The Rub, or the perky, cheerful piano tones of Zalo – to convey the band’s personality.

There are perhaps two tracks on the album that stand out, although undoubtedly neither are the most instantly memorable or likely to see mainstream success. The Ink has a chorus that is quite brilliantly satisfying, although hard to pin down. Its greatness resides somewhere in the way the melody dips then rises again, combined with the lovely little synth “whoop” noises sewn in along with the more usual arrhythmic guitars. Dolli – perhaps the oddest track – is also remarkable. Powered by its curious hard-edged “na na na-na na na” vocals, with “ooh ooh” harmonies soaring above the repetitious assertion “You know I’m a bird”, it creates an (unsettling, compelling) atmosphere all of its own.

It remains to be seen whether Dutch Uncles will find a niche for themselves; sitting, as they so enjoyably do, somewhere between the experimental and the pop. It is certainly to be hoped that they will, however. A band prepared to produce music this different and interesting that still maintains its inclusiveness and sense of fun does not come along very often, and – when it does – deserves to be widely heard and appreciated.