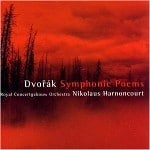 Some of Dvorak’s finest music was written in the twilight of his career. An extended visit to America in the 1890s spawned the New World symphony and the Cello Concerto, both staples of the core orchestral repertoire.

The symphonic poems however were written on his return from the US in 1896, and have been comparatively overlooked. This is a shame, for despite their gruesome subjects they contain some memorable melodies and demonstrate a craftsman’s touch with the colours of the orchestra. Take the opening of The Noon Witch, beautifully phrased by the first clarinet on this new recording from Teldec.

Nikolaus Harnoncourt is no stranger to Dvorak, having given critically acclaimed recordings of the last three symphonies, his taut and energetic readings giving a new slant to each piece. Of the four tone pictures presented here, only The Golden Spinning Wheel was previously unavailable, and is first up. Harnoncourt conjures a beautiful sound from the strings, lean but not cold, and the Concertgebouw horns are heard to good effect in the main fanfare.

Whilst The Golden Spinning Wheel is a kind of Czech variation on Cinderella, The Noon Witch is far more sinister, not to mention The Wild Dove which begins with a funeral procession and ends with a drowning. In between the dance music of the wedding reception is given plenty of bite, Harnoncourt bringing out the two against three rhythms.

For me however the best performance is The Water Goblin, whose closing pages bear a remarkable similarity to Tchaikovsky’s Pathetique Symphony. The brooding bassoons at the end depict the death of a mother’s child, with some savage music in the central sections.

Collections of the poems are short on quantity but high on quality. Rafael Kubelik’s versions, available cheaply with the Slavonic Dances on Deutsche Grammophon, are among the best recordings he ever made. The late Istvan Kertesz meanwhile makes equally compelling listening in his collection, still holding up well on a Double Decca set.

What Harnoncourt offers in comparison to these two is a different, more Germanic approach to these wonderful pieces, and whilst that may not suit everyone they are a perfectly valid alternative, pictorial and vivid. The clean digital recording might even tip the balance.