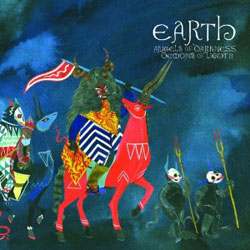 The Earth of today is a different beast to the one that rumbled into existence in the late 1980s. Dylan Carlson pretty much set the blueprint for Drone Doom/Metal and with Earth 2 raised the bar to new heights that even he has struggled to reach with his subsequent releases.

It was inevitable that Carlson and Earth would begin to evolve. As Carlson’s Earth begins to cool after it burst into life (albeit very slowly – but time is relative) 20 years ago, so the tectonic shifting of his sonic assaults have begun to fade and begin afresh. It’s a process that began with 2005’s Hex; Or Printing In The Infernal Method, which heralded Carlson’s return after a nine year hiatus. In place of crushing drone was a lighter approach that relied on repetition and incremental changes to guitar motifs. Angels Of Darkness II, the second album culled from the Angels Of Darkness sessions, continues Earth’s second phase as an improvisational Drone Country/Folk band. There’s a lack of grinding guitars, but the essence of Earth remains at the heart on these compositions.

Just as earlier Earth relied on riffs stretched to breaking point over vast expanses of time, the same is true here. Certainly it makes for a sedate experience. Now when notes ring out, they’re left to hang in the space left by Carlson and his cohorts (drummer Adrienne Davies, Lori Goldston on Cello, and Karl Blau on bass). Sigil Of Brass for example plays with a basic motif which slowly explores the structure of a chord. Each note resonates, twists in the ether and decays. The fact that these notes aren’t plated in the armour of distortion makes them seem so much more delicate and haunting.

His Teeth Did Brightly Shine is a more complex piece with the band members circling around a central conceit and conjuring a nightmarish haze. There are aspects of creepy folk at work here as the guitars shimmer and chime. There’s also a nod towards The Doors‘ more cinematic moments (in particular The End). There’s never an explosion of oedipal rage however, just a foreboding sense of danger. Despite Earth being Carlson’s baby, it is perhaps Goldston’s cello that makes the most impact. Her presence on The Multiplicity Of Doors injects it with a mournful delicacy that resonates. Davies’ understated drums come into play here too, providing a steady deathlike shuffle. The pair combine perfectly again on The Corascene Dog, a sorrowful blues that seems to be in a constant state of grieving.

Final track The Rakehell is slightly more upbeat and possesses a sense of light to counteract the shade. Finding joy in repetition, this slow stoner groove steps away from the folk and country elements found elsewhere on the album. It could easily be a mogadon roadtrip soundtrack – Uneasy Rider, perhaps. The endless rolling of the riff takes on the characteristic of an infinite desert road where every sign that passes suggests that there’s the rest of space and time ahead. The sedative nature of the song however keeps any hysteria at bay easily.

Angels Of Darkness And Demons Of Light II will disappoint those expecting Carlson to return to the cathartic rumble of the early days. It might even disappoint those who found Hex… an exciting change in direction in that there’s not an awful lot of new ground being covered here. Evolution is a slow process however, and this is only the second phase. Maybe Carlson will change tack and move into Phase 3 soon – where Thrones and Dominions await. For now, this is a hypnotic, well executed, if not altogether thrilling collection.