by John Murphy
published: 26 May 2014 in Album Reviews
Tweet 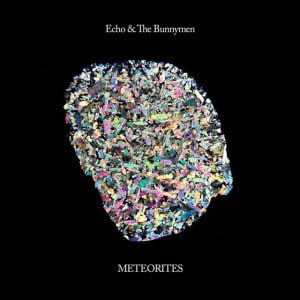 McCulloch and Sergeant. They may not quite have the iconic status of other songwriting partnerships like Lennon & McCartney and Jagger & Richards, but since 1980 they’ve created a pretty sparkling legacy.

Because, for a certain group of people, the ’80s weren’t about Madonna, Stock/Aitken/Waterman, day-glo colours and deedlyboppers. Instead, it was about dry ice, sardonic lead singers who always wore shades inside and dark, swirling melodies – and, for most people at least, Echo & The Bunnymen were at the forefront of this movement.

The Bunnymen story has seen as much tragedy as it has triumph – there’s been numerous band splits, plus the death in a motorcycle accident of drummer Pete de Freitas – but songs like The Killing Moon, The Cutter and Seven Seas still sound as fresh today as they’ve ever done. Yet, in 2014, with the band reduced to its core members of Ian McCulloch and Will Sergeant, the question is whether there’s really any need for a new Echo & The Bunnymen album?

Meteorites is the band’s 10th album, and was originally intended to be a McCulloch solo album – the frontman’s lyrics on this record are deemed to be his most personal yet – and after recording the songs in demo form, Sergeant added the guitar parts and the whole thing was stitched together by veteran producer Youth. It may sound like a pretty dysfunctional way to make an album, but to give the group and producer credit, they’ve created a polished and professional sound that’s reminiscent of prime-era Bunnymen.

They haven’t forgotten how to write a classic rock anthem either – Holy Moses, Explosions and Lovers On The Run are in the classic Bunnymen mould with big choruses and Sergeant’s shimmering guitar riffs to the fore. Even better is Is This A Breakdown, which contrasts some bleak, introspective lyrics with possibly the most jaunty, upbeat melody they’ve ever written. It’s an old trick, but one that works beautifully.

McCulloch’s lyrics are certainly more personal than ever before – there’s far more self-relection on songs like Grapes On The Vine, although the words of some tracks like Holy Moses do tend to slip into cliche now and again. Also, the slower material seems to drag much more than the more upbeat moments – the title track is a bit of a dirge while Burn It Down suffers due to the popularity in recent years of ‘stadium indie’ – it’s a song that you could easily imagine the likes of Embrace or Coldplay writing, which given the spread of the Bunnymen’s influence, shouldn’t be all that surprising.

The trouble is, that while comparing a band’s material to their early classics is a futile one, it’s also unavoidable. There’s nothing wrong with Meteorites, but it lacks the edge and attitude that albums like Ocean Rain and Heaven Up Here had and there’s nothing as instantly memorable as Bring On The Dancing Horses or Nothing Lasts Forever. There’s also a tendency, especially on the latter half of the album, for the songs to sound a bit formulaic – the chiming guitar, the string section, the rousing chorus, and repeat. Market Town is one of the better songs on the second half of Meteorites, but at seven minutes long it feels far too stretched out.

All in all though, Meteorites is a decent, if hardly vital, album from one of this country’s true national treasures. The world may not need a new Echo & The Bunnymen album, but it’s nice to have one anyway.