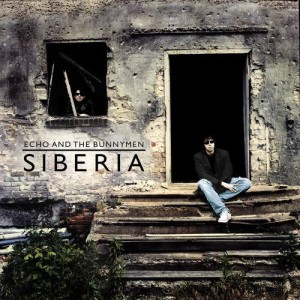 There’s something of a back to the future feel for Siberia, Echo & The Bunnymen’s ninth album and their first in four years. Hugh Jones, producer of the original line-up’s second album Heaven Up Here, is back behind the desk and the sound is discernably pre-U2. No surprise then that both U2 and Coldplay have cited Ian McCulloch’s band as amongst their influences.

It’s long been surprising to fans of Echo & The Bunnymen that their heroes, well on their way to chalking up three decades in the business, haven’t reached the ginormodrome-filling status of Chris Martin and Bono’s operations. In part this could be attributed to line-up changes and a wallowing in balladry at the expense of killer radio songs in their later records. Their recording budget, it must be noted, likely wouldn’t pay for U2’s rider.

But the good news is that Siberia is a moody, sadness-tinged demonstration of how guitar-based pop should be done. It won’t win any innovation awards or reinvent the wheel, but at this stage of their career the Bunnymen are justifiably content to write and record hook-laden pieces with a keen ear for melody. Will Sergeant’s wall-of-sound guitar is to the fore throughout and complements McCulloch’s deep, smokey croon – which reminds most of Elvis Costello.

Atmospheric production from Jones helps the resonant All Because Of You Days to sonic perfection, while closer What If We Are? tugs at heartstrings with piano, melancholic strings and McCulloch’s voice sounding better than ever.

Parthenon Drive reminds the listener that the Bunnymen were contemporaries of The Smiths – there’s more than a hint of Johnny Marr about the fretwork here. Further on, Everything Kills You is as anthemic a pop ballad as could be hoped for, McCulloch’s voice rarely more distinctive. Fine, it’s relatively MOR, but it’s good MOR – it sticks in the head long after the end of the track. Scissors In The Sand is the heaviest track on the record but helps to vary its sound, while the title track confirms Sergeant as a first rate lead guitarist.

But picking out a highlight from such a strong record is an almost futile task. The Bunnymen are back with a bang, for Siberia stands as their best record for a long time and only gets better with each listen.