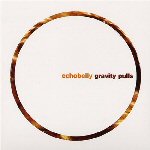 Echobelly briefly found fame back in the mid-90s during ‘Britpop’. At the time there was a huge amount of bands with a photogenic lead singer and a group of anonoymous looking blokes. So, despite the fact that Echobelly counted the far from faceless Debbie Jones as a bass player, they were lumped in with Sleeper, Belly, Salad and so on.

However, Britpop soon went sour and as with many other such ‘movements’, the public moved onto something else. Yet while Louise Wener started writing novels, Tanya Donelly launched a solo career, and Marijne Van Der Vlugt just, well, disappeared, Echobelly stuck together and continued releasing albums.

Gravity Pulls is the band’s fifth album, and displays a different type of sound from their earlier days. Echobelly’s trademark used to be infectiously catchy little pop songs married to some subversive lyrics, as on Give Her A Gun or I Can’t Imagine The World Without Me. On Gravity Pulls, the intelligent wordplay remains but the melodies appear to have given way to a more ‘mature’ approach.

This is a shame, as Sonya Aurora Madan always had an ear for a decent tune. Tracks such as Close But on Everyone’s Got One and especially former single Great Things were songs that were hard to get out of your mind but remained resolutely likeable not annoying. Here though the emphasis is more on dreamlike song structures and a very laid back approach. The results, while pleasant, can’t help but be a disappointment.

There is some good stuff here though. The title track is a suitably beautiful opener and gives early notice that the band’s indie days are long behind them. The pace rises slightly with the excellent You Started A Fire, which is probably the album’s only concession to a commercial sound. Best of all, Strangely Drawn is a lovely, stately piano ballad. The minimal backing allows Madan’s voice to really shine – a rarity here since the muggy production sometimes dulls her usually soaring vocals.

Too many of the songs though lie on the wrong side of blandness. The vast majority of the songs are mid-paced and sometimes come across as plodding. Tracks such as One In A Million and Djinn drift by pleasantly if unremarkably and sadly there isn’t much to bring back the uncommitted listener for a repeat playing. It’s good that the band have chosen to develop and evolve rather than produce pale imitations of former glories, but in ditching their previous sound they’ve lost what made them stand out in the first place.

Fans who have followed Echobelly throughout their career can buy Gravity Pulls safe in the knowledge that it continues and refines the direction followed in their previous release People Are Expensive. Others who only remember them from their heyday will probably be disappointed though.