Editors – In This Light And On This Evening 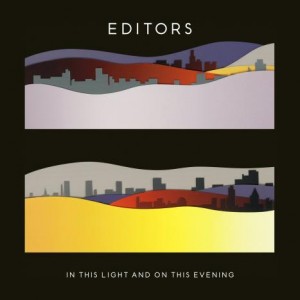 Editors did pretty well with their difficult second album, taking An End Has A Start to Number 1 in the UK charts and cementing the band in the nation’s consciousness. However, while that album seemed lighter and more commercial than their debut The Back Room, they encountered some criticism for essentially reproducing a similar sounding album.

With that in mind, much has since been said about how with their third album, In This Light And On This Evening, the band have progressed, having eschewed their trusty guitar sound in favour of one more synthesized. It’s both understandable and positive that they’ve decided to make that move rather than dourly churn out more of the same. But, in the same way as the new disco direction of Yeah Yeah Yeahs‘ It’s Blitz earlier this year turned out to not really be that much of a disco direction, In This Light And On This Evening isn’t as much of a departure for Editors as some have claimed.

It’s certainly true that they have made a step towards electro, but what they’ve done is simply transpose a certain amount of the instrumentation to keyboards. Whether it’s on the moody, pulsing title track or the Kraftwerk-inspired groove underlying Bricks And Mortar, a straightforward synthesized aspect tends to appear somewhere.

The superb You Don’t Know Love incorporates the kind of sounds that recall pop tunes of the 1980s, cutting away halfway through for a dominant spiky guitar riff that repeats through to the song’s completion. Meanwhile Papillon stands out as a ferocious slice of electropop with an urgency driving the song forward into its deserved position of lead single.

But with Tom Smith’s baritone voice in residence and their tendency towards huge anthemic choruses, it’s still unmistakably Editors. It’s a consistent album, but the second half makes less of an impact. The experimental, industrial sounding Eat Raw Meat = Blood Drawl tries something different again, but isn’t strong enough to really pull it off. And then there’s some typically unfortunate metaphors. Like Treasure’s “You are what you eat, you’ll become digested… You are what you eat, you’ll become digestives” is particularly difficult to, er, swallow).

Not as engaging as The Back Room, nor as immediate as An End Has A Start, In This Light And On This Evening is at least a solid addition to Editors’ catalogue and confirms that they can be relied on to produce a collection of listenable songs. Their sonic departure won’t be radical enough to put off fans, but the ultimate feel is familiar enough not to persuade any detractors. They may have taken a step forward, but they’re still on the same street.