Editors – The Weight Of Your Love 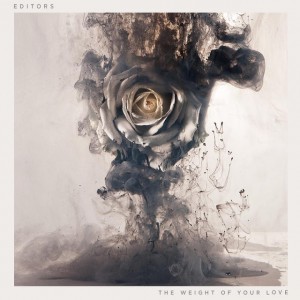 A baritone is a double-edged sword. Not literally, though it sounds plausible, doesn’t it? On the one hand, it gives a male indie vocalist a certain sonorous, sincere, profound timbre to his voice that weakens the female knee and comforts the lonely soul. On the other hand, it’s pitched far too low for those weak-kneed girls to sing along to at a concert. Let’s call it The Idlewild Problem.

Their last effort, In This Light And On This Evening, was a game effort to attain credibility with synths and art rock, but only the pop hook of Papillon struck a resounding chord. This album’s shot at a big hit, A Ton Of Love – a slice of driving guitar-fuelled Americana with barely a key struck in angst – barely plucks a rusty heartstring in comparison, despite Tom Smith forcing his voice into those untapped upper registers for the INXS-y chorus.

Much more successful are Hyena and Formaldehyde, the vocals accompanied by the kind of majestic guitar melodies that made An End Has A Start into an epic, proving that the departure of guitarist Chris Urbanowicz need not be a fatal blow. The latter song is also much enhanced by a fleeting melodic resemblance to Katy Perry‘s Hot N Cold. But for the most part, the six-stringed contributions are anonymous – Tom Smith has remarked that the songs are the type that work with just an acoustic guitar, and few seem to have been developed beyond that point.

It’s not a terrible album, just relentlessly uninspiring – and it features a midsection saggier than a pregnant cat. Honesty sounds like one of those 3 Colours Red ballads from the late ’90s that seemed so great at the time. Nothing is genuinely difficult to listen to without skipping; the “I’ve got nothing left” lyric painfully honest for all the wrong reasons. And if anyone takes What Is This Thing Called Love? seriously, just ask them to imagine the title spoken in the voice of Milhouse Van Houten, and they’ll soon come to their senses.

Meanwhile, too many songs spend too much time doing precisely nothing, like a road-trip down a Mid-West highway. There’s nothing wrong with a slow-burner, but none of these numbers ever ignite. The plodding build-ups that introduce opener The Weight Of Your Love and Two Hearted Spider are virtually interchangeable. More than one song tries to channel that relentless organic momentum Arcade Fire do so well, but fails to inject the joie de vivre that is so essential to the Canadians’ sound.

In trying to both retreat from the synths of album three, and progress from the epic soft-rock of album two, Editors have managed to produce an album that is neither interesting nor stirring. In the end, The Idlewild Problem was the least of their difficulties. They’ve already booked a number of festival appearances for this summer, and just about the best thing one can say about this record is that there’ll be plenty of opportunities to go to the bar.