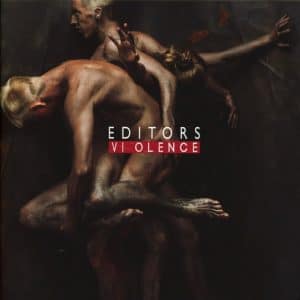 On the surface, everything about the sixth album from Editors suggests the perpetual gloom-mongers are about to explore new depths of darkness. Described as “brutal” by frontman Tom Smith, an album called Violence certainly doesn’t leave much room for optimism going on their past reputation. However, when it comes to the Birmingham five-piece’s latest effort, the old saying ‘don’t judge a book by its cover’ comes to mind.

That’s not to say that Violence is without many of the characteristics we’ve come to expect from Editors over the years, but it’s far from the all-out nihilism of their earlier work. Coming off the back of 2015’s successful In Dream, which saw the band recover from the identity crisis that plagued fourth album The Weight Of Your Love, there’s an emotional richness to Violence that brings some light to where there was once only darkness.

Admittedly, it doesn’t get off to the best start. Cold is not the most uplifting of opening tracks as Smith sings: “It’s a lonely life, a long and lonely life.” The sparse synths that form the song’s backbone struggle to bring anything interesting to the party and while the late guitar burst briefly ups the ante, it’s too little, too late. After something of a false start, though, Hallelujah (So Low) kicks the album into gear – and then some.

The single has a touch of Muse about it as Editors play an eerie acoustic guitar riff off against crunching electronics to enthralling effect. The intensity is like nothing the band has ever achieved before, with Smith’s lyrics suitably pointed: “I bleed like a millionaire/ cause my bones lay with dust in your care.” It’s bold, confident and captivating, just like most of the brightest moments on Violence.

Magazine is another example of the band’s ferocious new direction, with its mammoth, anthemic chorus and lyrics that fly in the face of those in power (“Now talk the loudest with a clenched fist/ top of a hit list, gag a witness”). Then there’s the title track, which shows just how far Editors have come since The Back Room, building gradually on its throbbing beat and fidgety noises before launching into a chorus that begs for a stadium setting.

“Baby we’re nothing but violence/ desperate, so desperate and fearless,” sings Smith, as if to emphasise the brave stylistic change the band has taken on the record the song takes its name from. There’s no doubt that this is the most adventurous Editors have been since they first experimented with synths on In This Light and On This Evening almost a decade ago and, while it takes several listens to really appreciate, the risk largely pays off.

Not everything on Violence leaves an impression, though, with the mid-section of the record getting dragged down by a couple of run-of-the-mill numbers. Darkness At The Door is possibly the most poppy and upbeat Editors have ever sounded, but it feels lightweight in comparison to what goes before it, while the less said about the frustratingly pedestrian Nothingness the better for all concerned.

With Benjamin John Power (Fuck Buttons, Blanck Mass) and Leo Abrahams (Wild Beasts) both having an input on production duties, it’s not surprising that Violence occasionally sounds as if Editors are throwing everything at it and seeing what sticks. Yet when they get it right – as they do on the beautiful piano ballad No Sound But The Wind and epic closer Belong – the record makes complete sense. It may not be an easy listening experience at times, but Violence is ultimately an album that deserves your patience.