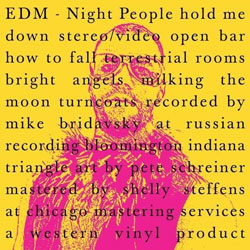 EDM were Early Day Miners, a Bloomington-based contingent centered on the solitary (and perennially moody) songwriter Daniel Burton. Their dedicated home has been Secretly Canadian – and as that particular label’s resonance has picked up more attention and acclaim during the last couple years, Burton’s music has been blessed with a lot of eyes and ears, all through his label’s name. Now, a decade into his career, he’s optioned the Miners tag for the succinct abbreviation EDM. His music hasn’t really changed, but it’s a better representation of his obfuscated, and occasionally spooky take on rambling prog-folk.

That doesn’t necessarily make him clear-cut. Night People can seem muddled by design. The sound is shrunken and narrow; tightly-wound guitars, frozen vocal channels, and noisy, ramshackle drums tend to needle through the ambience, brushing against ears. It is not an album with extraneous facets; in fact it comes off weirdly horizontal, tunneling directly towards you in acute texture and discomforting intimacy.

This could be the stuff of something great, but often Night People can’t quite turn its briskness into a means for memories. The dampened, blunt-force nature of the songs don’t come off heartened or passionate as much as they sound deflating. Sure there are moments like Hold Me Down, where spidery guitar work and white-knuckle tension becomes truly perturbing, but there’s also stuff like the abusively un-engaging eight-minute feedback burner Milking The Moon – whose artless wankery dominates a solid fifth of the running time. Elsewhere mechanized, muscular riffs beat out songwriting for space (Video/Stereo, Terrestrial Rooms) or things regress back into the roomy, front-porch folk, which, while aesthetically pleasing, remains completely unremarkable.

There’s scarcely a highlight on Night People. Props for sticking to a narrative, but the record’s world is morbidly grey – the percussion anaemic, the guitars flavorless. It’s not a fun, or even a slog with a reward at the end. Some records are boring, some are bad, but some are nauseatingly bland, the kind of stuff that makes you want to click over to better songs just to get colour back on the walls. Listening to this album feels like listening to a band’s great artistic statement limply evaporate simply because the sounds aren’t working. It’s a depressing thought, but Night People doesn’t even work as an interesting failure. It’s not hard to listen to because the content is rupturing or the nuance is too deep; rather it’s hard to listen to because the songs seem to disappear as soon as they leave the speakers. Burton can, and will, write better tunes, but the content here is completely deserving of its obscurity.