by Sam Shepherd
published: 28 May 2012 in Album Reviews
Tweet 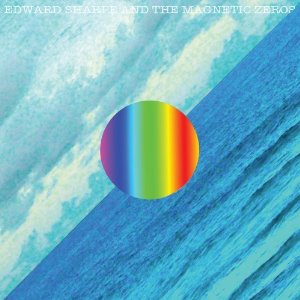 What kind of band would the Messiah be in? The answer rather depends on who your God is, but if you happened to be a womanising, bearded hippy type and a Messiah by the name of Edward Sharpe, then a folk and roll band that throws everything at the wall in the name of having a good time would most likely fit the bill.

Edward Sharpe is the Messiah as imagined by band leader Alex Ebert, who isn’t too far away from adopting the bearded party hippy look himself and the Magnetic Zeros are more than capable of delivering a feel good vibe as evidenced on their debut album Up From Below.

For their second album however, it would appear that ES&MZ have taken a step back and become slightly more contemplative and moody. This is in evidence as soon as the album begins with Man On Fire a desolate and dusty country song that instantly calls to mind the timbre of Johnny Cash and the wonderfully twisted tales of The Handsome Family with its mentions of heartache and rage. It’s a downbeat introduction, but even here there’s the occasional yelp and shafts of upbeat rhythms that permeate the gloom.

The gospel oom-pah of That’s What’s Up follows and lifts the mood somewhat. There’s still a considerable debt to Southern States country roots, although the addition of what appears to be a Clavinet keyboard gives the song a funky edge. I Don’t Wanna Pray continues to give praise in that Southern hoe-down style and edges further towards a gospel influence. It’s a simplistic banjo and bass drum backing, but the vocal performances are beautifully executed. It might seem a little stilted as a recording, but it doesn’t take a great leap of faith to imagine that this would be a blast live. Mayla keeps things within reach of the altar with its warm choir and gently strummed guitars. If anything it’s a little too happy to bask in the glory of the communion wine, and the hummed refrain sounds positively comatose with contentment.

Just as things are starting to get a little too churchy, ES&MZ start to explore the American musical canon a little more thoroughly. Dear Believer borrows heavily from Carole King, but that’s just about forgivable because the melodies on this lovely folk song are irresistible. Child evokes George Harrison for the briefest of moments, whilst One Love To Another goes one step further and re-animates Bob Marley’s chart friendly reggae perfectly, giving the album a much needed touch of sunlight. Perhaps the finest moments come right at the end with the fantastic blues gospel ballad of Fiya Wata which soars gloriously thanks to a breathtaking performance from co-vocalist Jade Castrinos.

Not to be outdone, Ebert turns in his best performance on closing track All Wash Out. There’s more than a bit of Smokey Robinson going on here and Ebert’s high register vocals possess a wealth of emotion. There’s a slight hint of Creedence’s Cotton Fields in the mix, amongst numerous familiar sounding hooks that never quite disclose their origin. As far as whistling, finger snapping, honky tonk piano ballads go, this is up there with the best of them and the interjection of a sorrowful brass section is heartstopping. This sounds like the soundtrack to the last shot of bourbon in a smoky saloon bar while the world is collapsing outside.

It’s a strong close to an album that is beautifully performed, but which could do with a little more of the sunny disposition that defined the band’s first album.