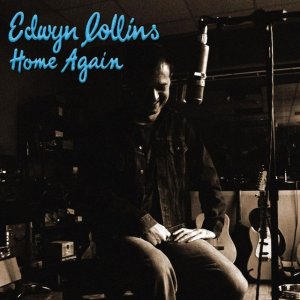 It almost seems insensitive to be offering judgment on Edwyn Collins. This is a man who, two years ago, was on the verge of death, let alone worrying about the next musical direction he was going to take. If things had gone even more pear-shaped than they already were – and a brain haemorrhage followed by MRSA was quite enough to deal with, thank you very much – then this would have been his final legacy.

As it is, Home Again, his sixth solo album, offers great hope for the future – both in its existence and its musical language. The late summer promise offered by the single You’ll Never know is fully realised, with extra context offered in the form of nods towards blues, soul and funk.

Throughout Collins is clearly enjoying himself, a man content with his achievement. Though this comes across most in the single, it’s immediately evident in the pastoral leanings of One Is A Lonely Number, with its tick-tock drum.

7th Son, meanwhile, ups the tempo, gets the psychedelic guitar out and does a good turn in distorted rock. Liberteenage Rag draws an unmistakable parallel with Doherty’s band in its title, but you sense the two are a world apart in personality.

Leviathan provides an unexpectedly sombre note, but that’s not to say it’s depressing – none of this album is – but it offers a thought-provoking check, both musically and lyrically.

The lyrics seem strangely prophetic, given the fact they were written before Collins’ illness. “I will get there on my own” is the principal sound bite of Written In Stone, and if you didn’t know better you’d think the songwriter had penned an anthemic lyric to see him to recovery. As it is the musical backing is gently soporific, masking some of the inner conviction.

The album dies a little towards the end as it drifts in and out of these hazy summer moods, before One Track Mind sharpens up the percussion and emerges from the reverie. And – you couldn’t make it up – Collins sings of how he fell and banged his head on the closer Then I Cried, as if he was aware of his own destiny.

Yet, pleasing as it is to report his progress on the path to recovery, this album gives just as much pleasure by confirming that musically he’s still at the top of his game, deserving of a place alongside Richard Hawley with one of the best singer/songwriter albums of the year thus far.