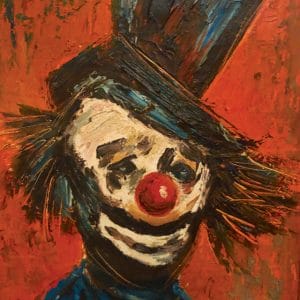 Eels’ 13th album has been a lucky one. Mark ‘E’ Everett and his band had all the songs in the bag bar one before the coronavirus pandemic hit, and have pressed ahead to get Earth To Dora released before the end of the year.

A first listen confirms that it is business as usual, for as ever with this source, the songwriting is cathartic not just for the listener but for the writer too. Eels continue to be a source of beautifully nuanced songs with an undercurrent of darkness and regret. The mood is positive but in spite of life, rather than because of it – and in this case E is tending to sing about other, fictional people who share his experiences.

While it may be business as usual, Eels’ songs have a warmer hue to them this time around. The Gentle Souls is an attractive example, its cheery music a mask for the lyrical themes of abandonment. Dark And Dramatic is a gentler composition in the same key, the soft thrum of the mandolin an evocative backdrop for a character lost in thought. “I know in my heart she’s too dark and dramatic for me,” Everett concludes.

Earth To Dora starts with a chorus, which a spoof interview with John Lennon on the Eels website confirms to be highly unusual. It is though an indication of their determination to leave their listeners with more memorable material among the finely crafted songs.

They score relatively highly. Are We Alright Again, the one song written in the midst of the pandemic, is described by E as “a kind of quarantine daydream I desperately needed to have”. It is a consoling hug of a track, written by a man who has been through an awful lot but who manages to find a way of getting back to the right level in spite of his trials and tribulations.

Elsewhere, E lets his inquiring mind loose on a number of relationship-related questions, mostly directed at other people. The ruminative Who You Say You Are has an appealing delicacy, while Are You Fucking Your Ex gets into the mind of a suspicious partner.

Generally this is out of character with the prevailing mood of the album, however, for its overall mood is one of sepia-tinged consolation. “Give him a hug, he’s been smiling since your birth”, goes the title track. Let’s Make It Real gives the biggest hit of optimism, countered by the largely content comedown of final track Waking Up. “Waking up next to you is all I really want,” murmurs E to himself.

It is an appropriate way to end an album notable for its warmth, using music as the ideal weapon with which to confront anxiety and hardship. E has of course been doing that for more than 20 years, but Earth To Dora finds him in a relatively peaceful place – and it will have a similarly calming effect on Eels fans too. More than 20 years on, this band are still very good at what they do.