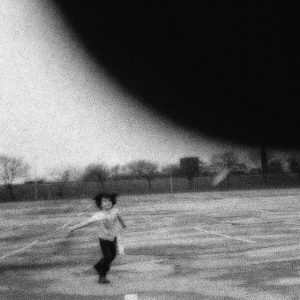 Efrim Manuel Menuck has spent much of the last two decades as one of the key members of Godspeed You! Black Emperor and A Silver Mt. Zion (and all their variations in name). He’s always tread a fairly uncompromising, leftfield path but on second solo album Pissing Stars he goes further than ever  before, delivering an album that sees him at his most personal and esoteric.

It was inspired by the brief romance (and subsequent break-up) in the 1980s of American television presenter Mary Hart and Mohammed Khashoggi, the son of a murderous Saudi arms dealer. In particular, it is Menuck’s documentation of how it affected him in his difficult teenage years.

It’s a suitably niche subject that allows Menuck to imagine a soundtrack to an insalubrious and confounding human story with all its repelling connotations. It also seems to have proved appropriate artistic inspiration to Menuck’s personal circumstances at the time of creation (he has explained that the album was made “in dark corners between 2016 and 2017, a very rough pair of years, shot through with fatigue, depression, despair, and too many cigarettes and too much booze”).

Musically, there were moments on recent Godspeed albums that saw them inch closer to some sort of post-rock centre ground, undoubtedly playing to their strengths while exploring familiar post-rock tropes but never sacrificing any quality or freshness. Muscular guitars lurching symphonically – check. Military style drum processions – check. Overriding sense that humanity is horrendously fucked and hopelessly beyond redemption – check.

On Pissing Stars the latter is still very much in evidence but musically it’s a far more ragged, drone-heavy proposition. It is the sound of Menuck further retreating to the musical hinterland, trying to deal with the inexplicable and the unfathomable by creating suitably pain-strewn, visceral music. It’s fair to say it won’t be troubling wedding reception dance floors and the like any time soon.

Pissing Stars is by no means an easy listen but, if time is invested, amongst the heaviness and foreboding, rewards can be found. The world may be a bleak, troubling place at times, but Menuck continues to find salvation through his music.