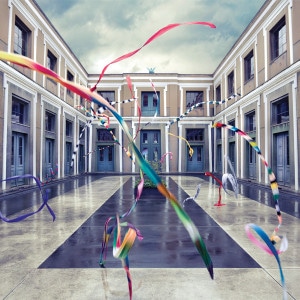 Until now Efterklang have largely been regarded as an electronic band, but the recent success of Performing Parades suggests the Danish tunesmiths have had their heads turned to the redemptive powers of acoustic instruments. As a result Magic Chairs is billed as ‘a new Efterklang sound’.

It marks the start of a new chapter, being their first album for 4AD – itself recognition of the fact that people are starting to catch on to their sound. If a soundbite were required to describe it, they’re a band to complement the Arcade Fires of this world.

Part of the reason for this is that Magic Chairs is beautifully orchestrated, showing just how much they’ve taken from the live orchestral experience in its beautifully woven parts for strings, brass and harp, which dovetail with vocals and percussion. It suits their sound extremely well for Thomas Sjöberg and Linda Drejer Bonde to be making their largely plaintive observations to such colourful accompaniment, and the drums operate with a commendable restraint – though when they are let loose they largely retain the punch of their previous outings.

Therein lies the only slight problem, the feeling being that the band are sometimes holding back a little too much. On more than one occasion the feeling is that we’re about to go hell for leather into a fast passage, the strings gathering strength with a big ostinato figure, before suddenly the music is pulled back from the edge. It’s a bit frustrating at times, but is often redeemed by the emotion of the vocals, not to mention the melodic freshness of the songwriting.

But when they get it right, the results are thrilling. I Was Playing Drums seems to operate at two speeds at once, the strings pausing and then rushing forward. Raincoats is more band orientated, with clever cross rhythms and handclaps, while the closing Natural Tune, with its “heading back” refrain, makes the listener want to go back to the the start. And with such gorgeous, treble-rich sonorities on offer, who good blame them?

A very satisfying addition to an already impressive Efterklang discography, then – and it would be interesting to see if the band writes faster music on their next album. You sense that once they do, an all conquering energy will be released.