by Daniel Paton
published: 28 May 2012 in Album Reviews
Tweet 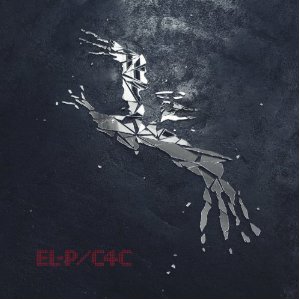 As part of the legendary Company Flow and as producer for the astounding Cannibal Ox, El-P cemented his status as a pioneer of radical, visionary hip hop well before he became a solo artist. He has worked consistently at the margins, in fearful and uncompromising territory, creating a sound that matches the dark claustrophobia of his lyrics every step of the way.

This is why it is perhaps surprising to find his third solo album (fourth if you include the highly underrated Thirsty Ear project High Water) beginning with something of a false dawn. The initial few minutes of Request Denied, upbeat and brash, could have slotted comfortably into The Prodigy’s Fat Of The Land. It’s disconcerting to find El-P’s characteristic relentless force channelled into something potentially commercial. Perhaps mercifully, it’s the briefest of glimpses into an alternate reality – the rest of Cancer For Cure is as attacking and harsh as one might reasonably expect.

There are some familiar rap album tropes here, not least the guest appearances, which range from the satisfyingly predictable (Killer Mike) to the somewhat bizarre and unexpected (Interpol’s Paul Banks and Nick Diamonds from Islands, who provides a jarringly whimsical flourish on Stay Down). These are usually deployed to add something to an already potent sound world – rarely detracting to the extraordinary force of personality and creativity that comes from El-P himself.

There are also plenty of elements that will prove satisfyingly familiar to admirers of El-P’s artistry. There’s the insistent but oddly awkward bass and beat dominated groove of Drones Over BRKLYN, or the distorted, abrasive noise that initiates True Story. Highlighting individual tracks is a little misleading, given that everything blends seamlessly into one continuous, unrelenting assault on the senses.

Lyrically, the tone remains stark and menacing, from the threat that concludes Sign Here (“We have ways to make you talk”) to the brilliant, horrifying opening lines of Tougher Colder Killer “To the mother of my enemy, I just killed your son/He died with his face to the sky and it cannot be undone”). Violence is a prevailing theme, but it’s not used for gangsta posturing (if anything, he satirises empty arrogance). El-P is instead a shamelessly intellectual lyricist – often musing on the philosophical implications of situations. After its opening confession, Tougher Colder Killer continues: “Grace in reverse, it gets worse/And I wanted you to know that since then I don’t sleep”. El-P continues to delve well beneath surface appearances.

He remains verbose and unrestrained, and at times his phrasing is mind bogglingly adventurous (“It must have taken every muscle in your body/To produce that little twitch you probably thought was passing muster/For a smile, but trust I recognise the gesture/I have seen it many times”). He enjoys being creative with half-rhymes and internal rhyme schemes (“I’m Rocky, run a hundred miles before my coffee” on the brilliant The Full Retard) and, for all the darkness, there is an inventive sense of humour at play too. Cancer For Cure is a dependably bold, powerful statement, perhaps not quite as masterful as its predecessors, but still overflowing with ideas and innovation.