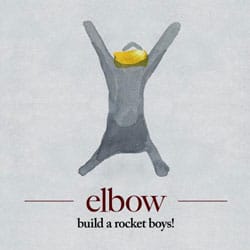 Trust Elbow to spoil the script. It used to be compulsory, when writing about Guy Garvey’s band, to mention the old cliche of ‘always the bridesmaid’, how their critical admiration would never translate into sales and so on.

And then came The Seldom Seen Kid, together with Ivor Novello Awards, BRITs and that famous Mercury Prize win. They toured with U2, the Glastonbury crowd was wowed, and One Day Like This seemed to become the soundtrack to everything from another England World Cup failure to a Big Brother‘s winner’s “journey”.

So it is then that Build A Rocket Boys! is heralded as one of the most anticipated album releases of the year. Have they written 11 new versions of One Day Like This, or ‘done a Radiohead‘ and explored ambient electronica, dubstep and black and white videos of Garvey dancing while wearing a bowler hat?

The answer, of course, is neither. Instead, they’ve recorded another Elbow album, full of quiet introspection, subtly life-affirming melodies and the usual brilliant lyrical sketches of Northern life. Sure, there are some anthems here (Open Arms in particular will have the nation’s arenas glowing with mobile phone screens this Spring) but the overall atmosphere is far from celebratory.

Lyrically, Garvey is superlative as ever. Lippy Kids is heartbreakingly wry – a celebration of teenage years which sees Garvey poking fun (“I never perfected that simian stroll”) at the hoodie-clad youths while also urging them to make the most of their youth: “do they know these days are golden? Build a rocket boys!”.

The superbly-titled Jesus Is A Rochdale Girl is the standout track here, a gorgeously understated ballad with some shuffling instrumentation and Garvey mournfully singing that he’s got “nothing to be proud of, and nothing to regret”. It’s a beautiful song, especially paired with the following The Night Will Always Win, an elegy to lost friends (“I miss your stupid face, I miss your bad advice, I try to clothe your bones in scratchy Super 8s, exaggerated stories and old tunes”).

It’s not all downbeat though. Neat Little Rows positively rocks, featuring some crunching guitar work from Mark Potter, while opening track The Birds builds up beautifully for its eight minutes – when the string section suddenly erupts, it’s the aural equivalent of a sunrise spreading colour.

Manchester’s Halle Youth Choir features on six of the tracks here, most noticeably With Love and, to gloriously life-affirming effect, the aforementioned Open Arms. It’s the latter that will appeal most to fans reeled in by One Day Like This, only it beautifully avoids sentiment and bombast.

Only the unnecessary reprise of The Birds, featuring an elderly gent on vocals, slows the momentum somewhat but it still has a certain poignant charm. It’s hard to see either long-term fans or anyone more recently wowed by the Garvey charm not loving this. In their own, low key, understated way, Elbow continue to beguile and impress.