Elbow – Giants Of All Sizes 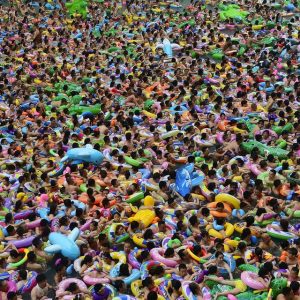 The UK is a troubled, disaffected, oppressive place to be right now and it weighs heavy on Giants Of All Sizes, the eighth album by Elbow. Speaking about the album, frontman Guy Garvey has been very open about how the last two years of political and social upheaval caused by the looming spectre of Brexit and its unknowable consequences has resulted in an Elbow album slightly different to its predecessors in terms of tone and mood. It was also shaped by Garvey’s response to death, the Grenfell tragedy and fatherhood. It’s not a surprise therefore that it’s arguably the heaviest Elbow album yet.

Brexit is addressed on Dexter & Sinister, an expansive three-songs-in-one track in possession of a driving, muscular groove. Garvey sings of how he feels like “a bird in a hurricane with the heaviest heart jackhammering in me” as the music unfurls around him. Later, White Noise White Heat sees him at his angriest, obliquely confronting the horror of Grenfell. It’s an imposing tour de force that shows he’s at his most powerful when singing in the first person; “I was born with trust that didn’t survive the white noise of the lies”. Garvey has spoken of how he felt the sheer anguish caused by such injustices can’t be easily remedied by something as abstract as music. Instead, here he prefers to shine a light on it and expose it for the abomination it is rather than offer any attempt at lyrical salvation or catharsis.

Many of the other songs on the album build musically on the success of the last two albums, The Take Off And Landing Of Everything and Little Fictions. On Seven Veils there are shades of The Blue Nile in the exposed feelings and searching sadness conjured in Garvey’s vocal. He sounds cut adrift and bereft, lamenting how there are “no roses in this garden, no sun melting in the sea”. The Delayed 3:15 was written by Garvey while on a train back to Manchester that had been stopped by a suicide on the track and sees both him and the band at their most discreet and compassionate.

Doldrums and My Trouble might be two very Elbow sounding titles but they fall into different categories here. The soaring strings and emotional tenderness of the latter might neatly fit into classic Elbow territory but the former sees a hint of menace creep into Garvey’s foregrounded, Paul McCartney-esque vocal hook.

Empires feels like an extension of the old rather than anything radically new, swaying and surging like an unsettled sea. Garvey mourns how “empires crumble all the time” as he pits the personal against a wider context, before setting off on a stream of consciousness run of lyrics. The massed vocals of On Deronda Road have an airy, celestial feel but the song iyself still sounds distinctly Mancunian (even if it is named after a street Garvey lived on in Brixton). It’s followed by Weightless, arguably the best song on the album. Musically set around a rugged bassline, it sees Garvey deliver poignant lyrics that draw parallels between his late father and young son. It’s an emotional sucker punch of a song to close the album.

They’ve always confronted sadness with beauty and it’s a tactic that continues to serve them well here. There might be more anger, darkness and politics on this album but Giants Of All Sizes shows they are still fundamentally one of the best bands around at offering consolation and comfort when the surrounding turbulence threatens to get too much.