Elbow – Leaders Of The Free World 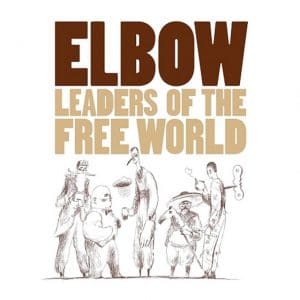 Almost exactly two years after their second LP, the slow burner that was Cast Of Thousands, Elbow are back with their third offering, Leaders Of The Free World. This is no small, low-key event – since their era-defining debut Asleep In The Back won them a sizeable fan base and a Mercury prize nomination back in 2001, their beautiful and distinctly affecting opuses have garnered them a reputation as one of Britain’s best bands.

Therefore a new record is usually one with a burden of expectation and excitement attached to it – you can always rely on Elbow to create fantastic music, as you can their direct contemporaries and fellow Lancastrians Doves and Starsailor.

So does LOTFW deliver? In short, the answer is a resolute yes. This is yet another fine album that should secure their position as a full blooded member of the UK rock aristocracy. They’re still miserable, they’re still big sounding and they’re still making a wonderful noise – business as usual, then.

Granted, the 11 tracks on here don’t display much progression from their previous two outings, but this is no bad thing – more of the same from Elbow should never be unwelcome, especially when they consistently produce songs that exude such melancholic beauty. If anything, the band have become more confident – which should be the case after years of heavy touring, good sales and critical acclaim – ensuring, at times, a bolder and beefier sound.

Where Cast Of Thousands may have occasionally sounded a little off the boil, LOTFW picks up where the majestic tracks off Asleep In The Back such as Powder Blue and Newborn left off – this is a band who certainly know how to rock out, despite only doing so sparingly in the past.

A case in point is opener Station Approach. Here Guy Garvey’s typically hushed vocals preside over a brooding piano, before the song builds up into a glorious, full on crescendo, as he sings valiantly about a newfound love for his hometown of Manchester – “You little sod I love your eyes, be everything to me tonight” – presumably an outlook accentuated after months of being away touring and recording.

Lead single Forget Myself is built on much the same foundations – its decidedly bold, widescreen chorus sticks instantly in the listeners head and is quite possibly this quintet’s finest moment to date. The title track is equally magnificent, a stab at one particular leader of the free word – “Passing the gun from father to feckless son, we’re climbing a landslide where only the good die young,” laments Garvey, on a steady, upbeat groove, the heaviest moment on the record.

And it’s not only disdain for the political situation that gets tackled. Relationships, in particular the common theme of failed romance – is something that goes under the knife regularly. Mexican Standoff sees Garvey exude a vicious hatred towards a lover’s new partner over some dirty, distorted guitars – “Yet he’d look ideal ‘neath the wheels of a car” and My Very Best, it seems, didn’t quite cut the mustard – “Gave that girl my very best, though it never made the grade.” The latter, along with The Everthere and the sublime Great Expectations, are some of the quieter, more pensive moments in the collection – and round off what is all in all a great record, their best since their debut.

It’s not the album of the year, nor are they breaking any major boundaries (perhaps they challenge and smash their own at times), but this remains another solid set of songs from one of the country’s most endearing groups. And by that reckoning, it’s well worth your time and money. Just don’t expect it to cheer you up anytime soon.