Elbow – The Take Off And Landing Of Everything 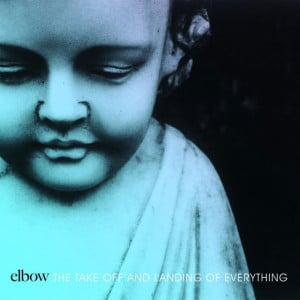 One of the many heart-warming Olympic moments of that glorious two weeks back in 2012 came during the closing ceremony when Guy Garvey, a man who’d look more at home propping up the bar of his local nursing a pint of bitter, strode onto stage with a huge grin on his face to conduct thousands of people singing along to Open Arms and One Day Like This. It was a moment that confirmed Elbow‘s elevation from ‘nearly-men’ to standard-bearers.

Yet it was also the tipping point. Success breeds familiarity, and we all know what familiarity breeds. Soon, Elbow became, to some at least, a by-word for that most hideous of genres, ‘stadium-indie’ – an accusation that would ring pretty hollow to anyone who remembers the heart-stopping beauty of the band’s debut album, or those who rightly acclaim Garvey as one of his generation’s most brilliant lyricists.

For this is the point that all those who dismiss Elbow as mere Coldplay copyists are missing: they write songs for anyone who’s ever been in love and then had their heart broken, for anyone who misses the comforting presence of long-lost friends, and for anyone who can see the beauty in the mundane and the poetry in the little, ordinary triumphs of the everyday. They’re also one of the few bands who can make a show in a cavernous arena sound like it’s in your front room.

The sound of change is all over the band’s sixth album. During the recording of The Take off And Landing Of Everything, Garvey’s 10 year relationship ended, and although this isn’t a “break-up album” in the way that Leaders Of The Free World so explicitly was, it’s impossible not to hear the sound of the recently heartbroken in there (listen to a line like “I am the boy who loved her so in every song” and try to imagine it’s not autobiographical). Most surprisingly, these most Mancunian of bands have a new city in their creative eyeline: New York.

Garvey’s three-month sojourn in Brooklyn while working on the upcoming King Kong Broadway musical hasn’t Americanised the band in any way though. Sure, there’s a song called New York Morning (apparently written in one sitting in Manhattan’s Moonstruck Diner at 6am as dawn broke over the city) but Elbow remain a quintessentially English band at the heart of it all – they’ve even produced their own pale ale named after one track, Charge.

In many ways, this is simultaneously both their most ambitious and most intimate album to date. Opening track This Blue World is a slow-burning seven minutes, a beautifully tender introduction to the album which, with staggeringly poetic lines like “While three chambers of my heart beat true and strong with love for another, the fourth is yours forever,” which confirm that Garvey’s still on top form lyrically.

Charge is a more malevolent beast – it’s about the sort of character that Garvey loves to write about, the down at luck chancer who spends his time staring into the bottom of the glass. Yet where the protagonist in Forget Myself or Grounds For Divorce were lovelorn or feckless respectively, Charge sketches a picture of an older man out of place amongst the younger generation, looking back with bitterness over his life. “Glory be, these fuckers are ignoring me, I’m from another century,” as one line puts it. It’s the man you see in the corner of every well-heeled bar muttering to himself, the guy whose eye you’re always conscious not to catch – Garvey gives him a backstory and character and it works brilliantly. The appearance of Manchester’s Halle Orchestra halfway through just gives it a touch more majesty.

Strangely, New York Morning is one of the tracks that doesn’t work so well – musically, it’s warm, rich and stirring, but is let down by some uncharacteristically clunky lyrics such as “it’s a modern day Rome where folk are nice to Yoko”. Garvey’s on safer ground on the terrific Fly Boy Blue/Lunette, a low-key shuffle where “someone’s dancing on the box, a former MP and nobody’s watching”, and a typically wry put-down of a Government minister as “a chinless prefect, gone Godzilla”.

Fly Boy Blue/Lunette also displays The Take Off And Landing Of Everything’s most pleasing element – the willingness to cut back on the anthems and experiment a bit more. If anything, this is the closest record to Elbow’s debut, with an emphasis on quieter songs that don’t so much soar out of the stadium than lean against the bar, reflecting wistfully. Colour Fields is built upon a subdued synth line that barely rises above a gentle jog, while both Real Life and Honey Sun could easily sit on Asleep In The Back, albeit performed by a band with 15 years more confidence and experience.

Mostly though, if there’s one thing that Elbow can still do well, it’s make you cry. On previous albums, it’s been tracks like Friend Of Mine, Scattered Black Or Whites or Great Expectactions and here it’s My Sad Captains. Stumbling into view on similar chords to Blur‘s Tender, it’s a song that celebrates friendship and is delivered with the delicious melancholy of knowing that, as age and responsibilities catch up, such friendships are likely to fade away. These are similar sentiments to those found on LCD Soundsystem‘s All My Friends, but delivered in a back-room snug rather than on a dancefloor.

They may have hit national treasure status a while back, with all the advantages and pitfalls that that can bring, but as long as they carry on producing music with as much soul, heart and beauty that’s contained on The Take Off And Landing Of Everything, Elbow will be with us for some while to come.