by Chris White
published: 8 May 2020 in Album Reviews
Tweet 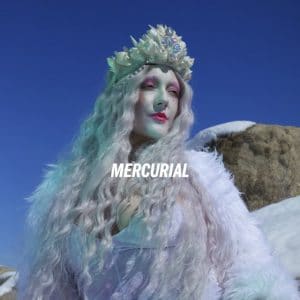 The enigmatic Elisabeth Elektra has had many different identities. Born Elisabeth Oswell in Northumberland and partly brought up in France, she’s been a fixture on the Glaswegian music scene for years, also performing as Sargasso Sea and Zyna Hel, before settling on her latest soubriquet, which she apparently also uses in her day to day life. A performance artist as well as a musician, noted for her daringly inventive stage costumes and make-up, she’s taken time to get herself on the commercial launch pad, but with her debut album Mercurial, Elektra seems set for a serious breakthrough.

Elektra’s husband is a member of the Scottish musical aristocracy, Mogwai guitarist Stuart Braithwaite, but her own work is a far cry from the long, meandering post-rock compositions of their celebrated career. On Mercurial, Elektra goes straight for the jugular with a series of impressively assured, massive electro anthems that, given sufficient airtime, could become big hits.

The album’s 10 tracks were written and recorded over three years, working with Franz Ferdinand’s Julian Corrie. Described by Elektra as a cathartic response to grief and loss, they’re characterised by icy, pulsating ’80s-influenced synthesisers, dramatic vocal performances and lyrics which combine spiritualism with emotional fragility.

At her most direct, Elektra has an innate pop sensibility that brings to mind Lady Gaga or Scissor Sisters with a gothic makeover. The pounding beats and soaring chorus of second track and single My Sisters, a tribute to marginalised women across society, are tailor-made for commercial success, and it’s the first of several instantly catchy, anthemic songs on Mercurial. Other standouts in this vein include the club-friendly Crystalline, the shimmering atmospherics of Inanna (named after the Sumerian goddess of war) and best of all, the epic album closer Obsidian, with its towering “I will love you forever” refrain and echoing vocal.

Elsewhere, Elektra does slow the pace from time to time to display a more reflective side. In this guise – for example on Sadie, with her glacial voice complemented by a fluttering, harp-like backdrop – Elektra closely resembles Bat For Lashes and Alison Goldfrapp. Lyrically, there’s a consistent theme running through the record, perhaps best described as a belief in the existence of an enduring life force that perpetually sustains itself through the ages in different manifestations. As she sings on Hieroglyphic: “I know you from another time, your face is different but not your eyes.” And while this kind of new age philosophising might not convince everyone, it’s an integral part of Elektra’s artistic DNA.

Mercurial isn’t especially original, and it could occasionally benefit from more variation. Nevertheless, it’s still a poised, confident and highly accessible debut from a performer whose patient honing of her songwriting craft is beginning to pay off.