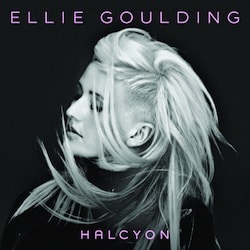 First things first. Ellie Goulding has not “gone dubstep”. There were more than a few rumours, or rather slightly sexist assumptions, that Goulding would be embracing the wub, bass drop and rewind now she’s an item with the movement’s poster boy Skrillex, but it’s not to be. Instead, Halcyon sounds very much how you’d expect it to sound – namely, an Ellie Goulding album.

That’s not to say that this is a simple retread of Lights. There’s a bigger sound, more seemingly personal lyrics (inspired, as the pre-publicity tells us by Goulding’s break up with DJ Greg James last year) and a new producer, Jim Eliot of Kish Mauve replacing Light’s main collaborator Starsmith (although the latter makes a couple of appearances as well). Yet, like Lights, Halcyon struggles with consistency – there are excellent moments, but it never really gels together as a completely successful album.

When Halycon hits its stride though, it’s a quality pop album. Anything Can Happen sounds absolutely immense, a huge, bass-driven stomp with an insanely catchy chorus, opening track Don’t Tell A Word sounds like a statement of intent – a slow build up before exploding into a monstrous drum-heavy anthem, while Explosions and I Know You Care see Goulding and Eliot go for a more subtle approach which works quite beautifully.

It’s a similar approach that Florence And The Machine took last year with Ceremonials – an obvious nod to the American market that both Goulding and Florence Welch are successfully starting to crack. Yet, like with Welch, something of the original’s charm has been lost. There’s a few too many tracks that just float on by, lacking any real charisma, not helped by Goulding’s tendency to squeak her lyrics.

Yes, that voice. We need to talk about Ellie’s vocals. At times on Halycon, it’s unclear whether Goulding has been heavily auto-tuned or whether she’s actually impersonating someone being auto-tuned. At times, it becomes difficult to listen to, such as on Atlantis where she nasally cries “When you go, when you go” on the chorus while also appearing to yodel in the background. Sometimes though, those idiosyncratic vocals work just fine – Only You which sounds like a dancefloor anthem in the making, or on the gorgeous Explosions, her most emotional and impassioned vocal since the debut album’s The Writer. Elsewhere though, she’s the very definition of a Marmite singer.

Goulding has certainly matured as a lyricist though. One listen to Halycon leaves you in no doubt where her head was during the recording of the album, and songs such as Joy and I Know You Care could give Adele a run for her money in the ‘broken-hearted ballad’ market. Even Hanging On seems to slot nicely into place, despite it being an Active Child cover version (and the review copy that we recieved didn’t feature Tinie Tempah rambling on about Gaviscon, which is an added bonus).

There are a few too many tracks though that seem to prioritise atmosphere over a strong melody. It’s weighed down by a characterless mid-section where the title track and Figure 8 seem like filler, and the annoying Atlantis and bland Dead In The Water make for a disappointingly uninspiring end to the album. It will undoubtedly contribute to a continuing successful profile over the Atlantic, but it looks like we may have to wait a bit longer for a truly successful album from Ellie Goulding.