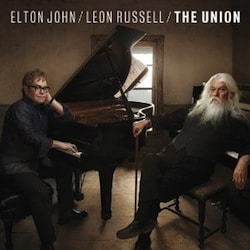 The bitch is back, and this time he’s matched with singer-songwriter Leon Russell and producer T-Bone Burnett. Elton John, our Captain Fantastic of yore, is significantly more subdued and affecting in his latest effort The Union, which is also his 30th studio album.

Continuing on from where 2001’s Songs From The West Coast, Peachtree Road in 2004 and The Captain & The Kid in 2006 left off, The Union maintains Elton’s recent reputation as a master of hooky songwriting and acoustic musicianship. If Songs From The West Coast was hailed by critics as a return to form, The Union proves that, as an artist, Elton has been rather liberated by his recent successes.

Leon Russell, cited by John as an early influence, lends a raspy Southern edge to the record, his contributions seeming more like the mark of a genuine collaboration than a mere throwaway guest spot. Russell and Elton alternate on lead vocals, sometimes within the same track, and both wrote songs for the album, with Elton’s steadfast lyricist Bernie Taupin providing most, but not all, of the words.

If The Union doesn’t quite reach the peaks of Songs From The West Coast, it proves that Elton’s soulful, introspective late-career style can be translated to the brand of down-home blues-rock in which Russell specializes. It’s a new suit that both collaborators wear well. In its style, The Union borrows most closely from Elton’s 1970 country-tinged album Tumbleweed Connection, but Russell injects a freshness to the record that’s been sorely needed in Elton’s material of late; he seems to be having more fun here than usual, and one can only assume it’s because of his partner in crime.

Russell starts the album off with If It Wasn’t For Bad, a rollicking ode to moral relativism, before we’re propelled into the Elton-led Eight Hundred Dollar Shoes, which borrows lyrical moments from the Elton John discography. It’s impossible to listen to I’ve Seen That Movie Too from 1973’s Goodbye Yellow Brick Road and not hear the precursors to Taupin’s lyrics here: “Yeah, I’ve seen your movie/And I read it in your book/The truth just flew off every page/Your songs have all the hooks.” The anger of Elton’s earlier songs is mostly replaced by wistful remembrance or, more intriguingly, regret, as in I Should Have Sent Roses.

As skillful as the orchestrations are here, there’s an occasional uneasiness to Elton’s pairing with Taupin, whose lyrics occasionally fit rather jaggedly over the melodies to which they’re assigned; this is rarely more evident than in the chorus of Eight Hundred Dollar Shoes, the title of which fits restlessly atop the melody line and presents a mouthful for Elton to enunciate.

More positively, Hey Ahab proves that Elton is once again fit to tackle up-tempo numbers after several failed attempts on recent albums (cf. Peachtree Road’s They Call Her The Cat and The Captain & The Kid’s And The House Fell Down). The album’s other most noticeable up-tempo song, Monkey Suit, ranks as a quasi-success, though its execution is somewhat more accomplished than its writing.

Hearts Have Turned To Stone, written by Russell, proves that his is the kind of inventive songwriting needed on an Elton John album, and There’s No Tomorrow, a collaboration between Russell, Elton, Burnett, and James Timothy Shaw, provides the album with perhaps its most stirring track. Its titular refrain highlights the album’s overall themes, which consciously include aging and living in the moment.

Elton and Taupin’s signature style dominates most of the rest of the album. Their lush Gone To Shiloh hearkens back to Civil War balladry, featuring a particularly choice cameo appearance from Neil Young. Admirers of the Elton John ballad form will rejoice at The Best Part Of The Day, Never Too Old (To Hold Somebody), and especially When Love Is Dying, three uniformly excellent tracks that follow in the footsteps of 2001’s Original Sin, 2004’s It’s Getting Dark In Here and 2006’s Tinderbox.

Elton’s solid tenor voice has slid down into that of a husky basso but has lost none of its signature character along the way. It’s these well-written, insightful ballads that best prove his staying power. On The Best Part Of The Day he beseeches us: “I hear you singing I Shall Be Released/Like a chainsaw running through a masterpiece/But that’s all right, that’s OK/Grab the bottle and slide my way.”

Rapt, we as listeners are prone to do just that, as if we’re sidling up to an old friend who’s suddenly gained some insight after all these years. If Elton’s more rollicking pop days have subsided, what’s resulted is inviting, adult, introspective, and musically sophisticated. Elton and Russell, having come together for The Union, have made an album that delivers as a confident enmeshing of their talents.