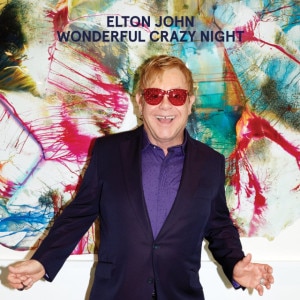 At the age of 68, Elton John has given us his unadulterated party album. There’s not a hint of ‘the bitch’ – he’s resolutely upbeat and quite clearly having a ball. Even the cover shows him arms open and grinning from ear to ear. The themes and musical proclivities of his 32nd studio album are laid out for all and sundry in the title track Wonderful Crazy Night. His sharp tongue is firmly in check – this is nice Elton, warm Elton – and he’s eager for everyone to have a bloody good time.

Recorded in a speedy 17 days, it’s his first album since 2006’s The Captain And The Kid to feature some key members of the Elton John Band, and there’s an exuberance here only captured in fits and starts in his latter day efforts. Although there are plenty of mid-tempo tracks, they act more as breathing space for the uptempo ones, Guilty Pleasure being one of the strongest. It’s a big toe tapping, flashy hoe-down of song that’s destined get a good airing at many a stadium.

Looking Up is very much in the same vein and features an attractive rolling piano line. We also get a chunky riff from Davey Johnstone and a big fat solo to boot. The band convene to create a brassy big band sound, kept rolling along by Nigel Ollson’s solid percussion, that will most certainly have wide reaching appeal and will sit well alongside the likes of Saturday Night’s Alright For Fighting and The Bitch Is Back when he takes the album on the road.

There are few surprises on this record, and it’s clearly aimed at the mainstream, but he does administer the odd curve-ball at times. Claw Hammer is a slight oddity on an otherwise distinctly formulaic album, quite frankly a little trippy. Underneath its pretty standard trajectory there’s a little freaky keyboard line and John breaks out a jazzy piano solo. As for the lyrics, there are claw hammers, loosening lips and breaking down doors; all in all it’s bafflingly enjoyable.

The slower tracks are more of a mixed bag. Blue Wonderful is pretty standard fare, but the following song, I’ve Got Two Wings, is a far more interesting slice of Americana, with a lovely shuffling beat, warm bass line and some of John’s more understated, relaxed vocals. Sadly A Good Heart doesn’t fare so well, being the kind of ballad John has produced time and time again in the latter part of his career. Rather than the interesting and infinitely more subtle flourishes of Daniel or Tiny Dancer, John insists on pursuing a well-worn, soaring and obvious tack, more than matched by Bernie Taupin’s overwhelmingly sentimental and syrupy lyrics.

When all is said and done, Elton John has made an album that will undoubtedly bring a lot of people pleasure. And whilst some of his contemporaries continue to push the envelope of pop music, and others just release material of an inferior quality to that of their heyday, John is the dependable crowd pleaser. It would be churlish to criticise an album that was clearly made with big heart and enthusiasm on the basis of its middle of the road leanings. Yes, it’s Elton John by numbers, but it’s his talent as a songwriter that has solidified his stature in popular music and that wide appeal will only be further cemented by Wonderful Crazy Night.